Beyond Meat weighs up move into mince with UK trademark 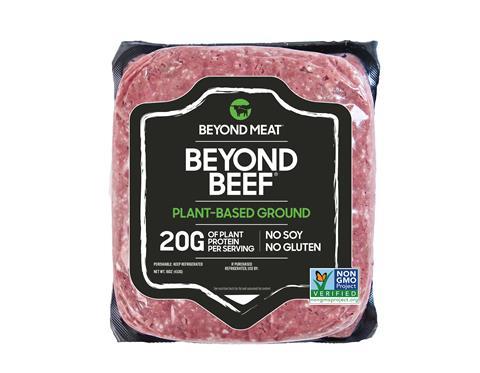 US plant-based giant Beyond Meat looks set to expand its UK offering after registering the trademark Beyond Mince with the Intellectual Property Office.

The owner of the Beyond Burger - which launched second variant the Beyond Sausage in the UK in September - filed an application on 7 November for the Beyond Mince name, which it isn’t currently using in any other market.

Beyond currently sells two products that resemble mince in the US: frozen pea protein-based Beyond Beef crumbles in beefy and feisty flavours; and a chilled Beyond Beef ground variant, which launched in June and is made from a blend of pea, mung bean and rice proteins.

Beyond Beef was designed to “not only look, cook and satisfy like traditional ground beef”, but also “to be versatile enough to be used in any ground beef recipe including tacos, dumplings, bolognese, sliders and more”, it said.

The brand did not respond to requests for comment on a potential UK launch. However, if Beyond did launch a minced beef alternative into the UK, it would be competing against similar products from market leaders Quorn and Linda McCartney’s, and newcomers including The Vegetarian Butcher and The Meatless Farm Co.

Beyond Meat posted UK supermarket sales of £1.6m in its first year on sale in the UK [Nielsen 52 w/e 7 September 2019] making it the second-best performing new brand in the meat-free category.

The brand, which floated on the Nasdaq stock exchange in May, saw global sales jump by 250% in its third quarter results last month.

It is set to start European production in the new year at a new factory in the Netherlands.

Big interview: How Heather Mills is building a Silicon Valley for plant-based food - in Newcastle