Finnebrogue plans plant-based ‘revolution’ for 2021 with trio of trademarks 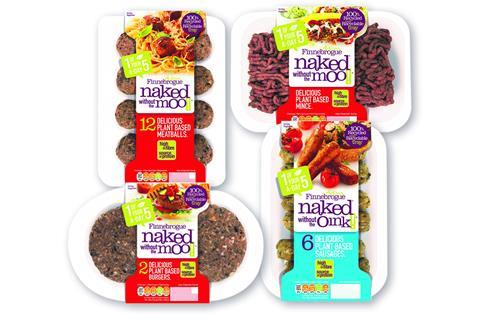 Nitrite-free bacon pioneer Finnebrogue Artisan has revealed its ambitions to significantly expand its plant-based offering in 2021, after registering trademarks for plant-based chicken and fish alternatives.

The Northern Irish supplier filed an application with the Intellectual Property Office for the name ‘Naked without the Cluck’ on 10 September covering products such as meat-free sausages, meatballs and mince.

It then lodged another for ‘Naked without the Splash’ on 9 October for potential NPD like plant-based goujons and fishless fishcakes, as well as under a different class for pies containing fish substitutes.

On 22 October, a further trademark for ‘Join the Naked revolution’ was filed with the IPO, suggesting Finnebrogue’s plant-based range could be the subject of a marketing push in the near future.

A spokesman for the supplier said it would not yet comment on the developments.

The move comes after Finnebrogue unveiled plans in October to open a £25m 200,000 sq ft plant-based factory in County Down by the end of 2020 – a facility it said would act as a springboard for a further push into plant-based in 2021.

It followed the supplier’s first branded move into plant-based in May this year with a slew of meat-free NPD under its Naked brand. It added a further Naked without the Oink unsmoked bacon SKU in September.

The term ‘Naked’ was previously used to signify its meat range’s lack of nitrites – something Finnebrogue recently expanded upon through the launch of a “category first” nitrite-free pigs in blankets SKU.

But at the time of the Naked plant-based launch, the supplier said the use of the term on its new products referred to their more general use of natural ingredients that were “good for you and good for the planet”.