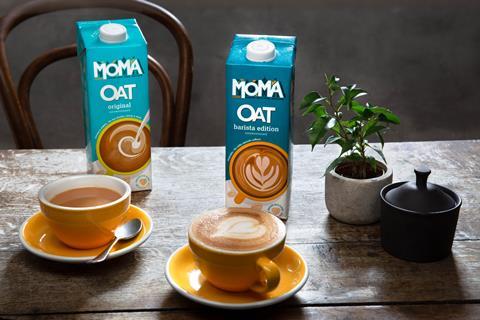 Aimed at busy 25 to 45-year-olds pursuing flexitarian diets, the unsweetened milk alternatives will be sold in more than 550 Sainsbury’s ambient aisles from 1 March.

Coming in two variants – original (rsp: £1.50/one litre) and barista edition (rsp: £1.80/one litre) – the SKUs are said to be specially designed for hot drinks.

Both will be produced with wholegrain oats and are not made from concentrate. They will be fortified with viatmins D, B2 and B12, and promise to include ‘cholesterol-reducing’ fibres, such as beta-glucan.

“We’ve been well-placed to move into the oat drink category because of our oaty heritage,” said MD Pete Joubert.

“Our very first product sold from a makeshift stall in Waterloo was a smoothie blend of oats and fruits.

“We’ve spent years tweaking our oat drink recipe until we were confident we’d created something that was up to the high standards we hold for our products.”

The products will also be available in Booths and on Amazon.

It is the south London brand’s first foray beyond its breakfast portfolio, which comprises porridge, bircher muesli and granola. It previously included a selection of smoothies made with oats, fruit and yoghurt.