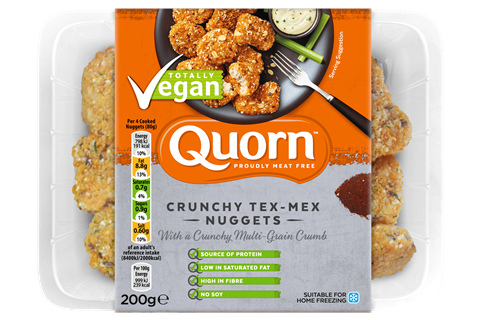 The new Mexican-themed meat-free chicken nugget SKUs will be coated in a breadcrumb made of quinoa, oats, barley and linseed

Quorn is to expand its meat-free chicken offering with the launch of two new Mexican-themed vegan SKUs into supermarket chilled aisles.

The nuggets will roll out exclusively into Morrisons from 11 September before appearing in Sainsbury’s, Waitrose and Tesco in October. They will be coated in a breadcrumb made of quinoa, oats, barley and linseed and promise to come in at 200 calories per 80g portion.

Meanwhile the escalope SKU, which is said to be “high in fibre, low in saturated fat” and contains no soy, will launch into Waitrose from 2 October and then Tesco later in the month.

Quorn said the move was prompted by big boosts in the meat-free chilled sector, which has seen value sales grow 30% year on year to £417m [Kantar 52 w/e 14 June]. The category had also received a 40% year-on-year boost in allocated retail space, it added [IRI 52 w/e 20 June].

“[With] awareness about the environmental consequences of people’s dietary choices at its highest-ever level, we’re introducing two high-on-flavour, low-on-calorie products that are a healthy source of protein, better for the planet and ideal as a midweek snack or centrepiece for a main meal,” said Quorn Foods’ UK marketing director Alex Glen.