Coca-Cola unveils its first bottle made with marine plastic 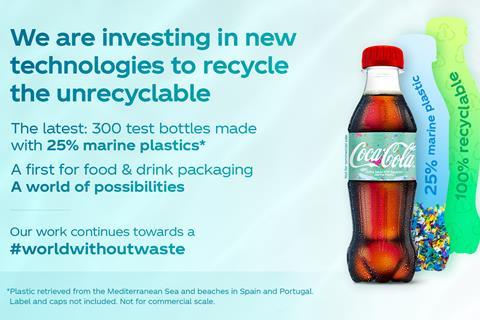 Coca-Cola has unveiled its first bottle made with marine plastic – in a move to demonstrate that “one day, even ocean debris could be used in recycled packaging for food or drinks”.

The company has created 300 sample bottles featuring 25% recycled plastic retrieved from the Mediterranean Sea and beaches in Spain and Portugal.

It was “the first-ever plastic bottle made using marine plastic that has been successfully recycled for use in food and drink packaging” claimed Coke – which made the pack in partnership with ‘clean tech’ business Ioniqa Technologies, chemicals company Indorama Ventures, and Mares Circulares (Circular Seas), an initiative to clear marine litter.

The bottle was designed and developed “to show the transformational potential of revolutionary enhanced recycling technologies, which can recycle previously-used PET plastics of any quality back to high-quality plastic that can be used for food or drink packaging”, Coke said today (3 October).

The new measures include working to remove all unnecessary or hard-to-recycle plastic through lightweighting and the removal of all secondary packaging made from plastic. This would avoid the use of more than 11,000 tonnes of plastic per year, Coke predicted.

Finally, Coke today said it would support “well-designed” deposit return schemes across Western Europe “where a successful proven alternative does not already exist”, and would disclose its packaging footprint on an annual basis by packaging type, as well as reporting on performance against stated commitments and goals.

“Too many of the world’s finite resources are currently discarded as waste,” said Tim Brett, president for Coca-Cola Western Europe, said. The new sustainability targets were “ambitious and rightly so”, he added. “There is a valuable role for packaging, but it must always be collected, recycled and reused. Our aim, working in partnership, is to see the term ‘single-use plastic’ become redundant, both in our business and beyond, as all of our plastic – and indeed all of our packaging –is delivered within a closed loop.”