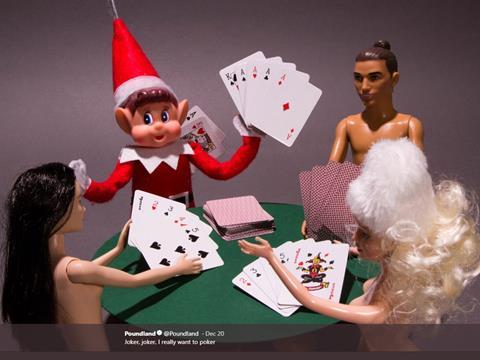 Poundland’s naughty Christmas elf is set to return and promises to be no less controversial.

‘Elfie’ is to take over the discounter’s social media channels from 1 December with a new female partner called Elvie.

Last year’s campaign, which included the elf dangling a teabag between its legs over a female doll, earned a slapdown from the Advertising Standards Authority, which ruled it was likely to offend and shouldn’t be shown again in its current form.

The cost of the props last year was just £25.83, Poundland said. In a tongue-in-cheek announcement of this year’s campaign, the company said bosses had decided to “triple” the budget to £76.59, and “agreed to increase significantly the risk of offending snowflakes”.

A teaser is due to be posted on Twitter today, showing the campaign team and featuring a Spice Girls reference, according to a Poundland spokesman.