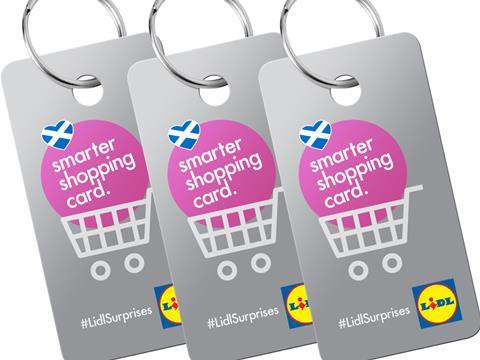 What is Lidl doing? Lidl has launched a 10-week trial of a ‘smarter shopping’ card in Scotland that rewards customers with special offers. Five million cards were distributed by direct mail, newspapers and via its 90 Scottish sites on 20 August.

How does it work? Lidl insists the scheme is not a loyalty card. There is no registration or accumulation of points. And Lidl has confirmed it will not be collecting data though it will be able to monitor redemption rates. Instead customers can redeem the offers instantly at the checkout. And it’s not an electronic voucher either as there is no restriction on how many times a customer can use the card, so customers can tap into the latest offer regardless.

The first offer is a saving of £5 when a customer spends more than £25. The offers will change each week.

Why is Lidl doing this? Lidl says it is a way to reward existing customers and encourage new consumers to do their main weekly shop with them.

“Lidl, like most discounters, suffers from the fact that there are very few customers who will be doing all of their shopping with them,” says Roberts. “The discounters get their fair share of secondary shoppers who are doing bits and pieces.”

Aldi’s average basket size is markedly higher than Lidl’s, however, and a loyalty card could help Lidl close the gap.

According to Steve Dresser, director at Grocery Insight, it could simply be a “ruse” to frighten Aldi, against which it has been gaining traction. He also says it could be timed to tempt new customers in ahead of the Christmas period.

However, Savvy Marketing owner Catherine Shuttleworth believes Lidl has been prompted to launch the card in Scotland due to the ferocity of the competition. “It demonstrates they are fighting every bit as hard as the supermarkets for their customer base and are finding it tougher,” she says.

Nick Harrison, European retail practice co-leader at management consultants Oliver Wyman, which recently published a report on The Future of Customer Loyalty, says one issue discounters face has been how to get that one-to-one customer relationship.

“A promotion card such as the one Lidl is trialling might be a good way of building this customer database and connections without the full cost of a traditional loyalty scheme,” he argues.

Is it a good idea? The discount model has been a simple one with faster checkout queues, no loyalty cards, an easy to shop layout and discounted prices. This change makes Lidl more complicated operationally, with increased activity at the checkout.

“One of the great things about these businesses is simplicity and when they [introduce] complexity they start to lose their leading edge,” she says.

Is it likely to be rolled out nationally? Lidl says it has no plans to roll this out beyond Scotland and stresses it’s a trial - although a spokeswoman did confirm that feedback from customers had been “phenomenal” and the initiative would enable it to “really test the effectiveness of an offer like this”.

Roberts believes the promotion card is a good innovation. “If it works in Scotland they could roll it out and use it at seasonal times of the year to bring that more lucrative seasonal spending in,” he says.

Harrison predicts more trials for the “promotional card” and potentially outside the UK market.

Are discounters becoming too much like the supermarkets? Kantar’s Roberts believes the Lidl business has already lost its simplicity with an increase in ranging and more promotions.

“This is another sign that Lidl has given up being a discounter and is basically a supermarket,” he says.

He also thinks it unlikely Lidl will head down the route of a fully-fledged loyalty scheme due to the costs of updating point of sale, upgrading systems and the additional manpower needed to work with any captured data.