Profiteering during coronavirus most rife in London, reports CMA 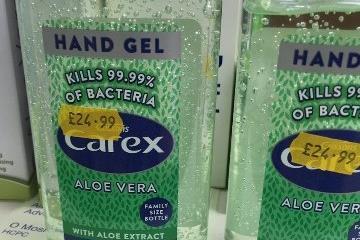 Profiteering has been particularly prominent in east London boroughs, with more than 250 pricing complaints in Tower Hamlets.

The 10 local authority areas with the highest rates of excess pricing complaints per thousand premises are all in or near London, according to the Competition & Markets Authority.

The watchdog said this was partly a reflection of complaints against small, independent supermarkets and grocery stores.

The top three most complained about business types on excessive prices were: pharmacies & chemists, general/convenience stores and independent supermarkets. And the most frequently complained about products were hand sanitiser, PPE (predominantly face masks), staple food products/groceries and halal meat.

The largest price increases concern hand sanitiser, with a reported median rise of almost 400%, according to CMA figures. The average increase across all products was 160%.

There is no current UK legislation regulating the price of goods, so in general sellers can charge what they see fit. Changes were proposed as part of the Coronavirus Bill, but they were not passed by parliament. The CMA said last week it had now advised the government on the introduction of new powers to deal with excessive prices during the pandemic.

Consumers are encouraged to report examples of excessive prices to the CMA.

“Like most people, my CTSI colleagues and I are appalled by the behaviour of some businesses at this time,” said Chartered Trading Standards Institute CEO Leon Livermore.

“The vast majority of businesses have responded responsibly and demonstrated all that is good about British business. The British public will remember which individuals and businesses supported them at this time and which showed utter contempt for them and vote with their wallets once this crisis ends.”

“Life is hard enough in the current situation, without being ripped off by unscrupulous profiteers or targeted by criminal scammers,” said Stephen Knight, London Trading Standards operations director.

“We encourage people to follow Trading Standards’ advice and especially urge family, friends and neighbours of vulnerable residents to be alert to the potential for scams and to do their best to protect those who might be at risk.

“Sadly, we don’t have sufficient powers to tackle the pandemic profiteers. However, we would welcome the opportunity to do so, if the government agrees to the recent CMA request to put suitable powers in place.”