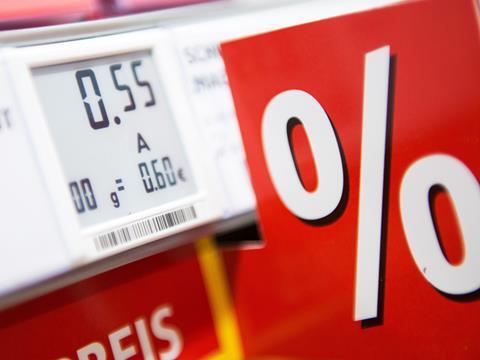 Are UK grocery shoppers about to enter a new era of Uber-style surge pricing?

As if there weren’t enough uncertainty around with Brexit and the hung parliament, we were told in the press this weekend that there could be an end to fixed-price groceries in the UK within five years.

This dramatic, and may I say far-fetched, theory is based on the premise that Tesco, Sainsbury’s and Morrisons are replacing paper shelf-edge labels in some stores with electronic ones. Having done so across their estates, they will be able to change prices several times a day in response to demand.

There are two fundamental problems with this premise, which for me equates to putting two and two together and getting 17.

The first of these is that is just doesn’t sound like a tactic retailers would be keen to employ and, secondly, and most critically, customers wouldn’t stand for it.

“We have no intention of introducing dynamic or ‘surge’ pricing. We’re trialling electronic shelf-edge labels at a store in Leeds. It’s very early days, but we’re looking at the potential benefits of an electronic system over the current paper-based approach,” a Morrisons spokesman told The Grocer today.

The benefits of such a system, as far as I can see, are far more obvious and less sinister than a plan to squeeze more money out of hard-pressed shoppers. Rolling out electronic shelf-edge labelling across a large estate is likely to be an expense initially, but once in place will result in far greater efficiency.

It will also be likely to create far greater accuracy of pricing and avoid controversy such as that surrounding Tesco in February, when a BBC investigation found dozens of stores had out-of-date promotional offers on the shelves, resulting in its undercover reporter (and no doubt plenty of customers) being consistently overcharged.

If anything, these systems are far more likely to be used to reduce prices than raise them, as retailers look to avoid short-life fresh products going to waste towards the end of the day.

Surge-pricing works for a company like Uber or the budget airlines because most of the time, away from peak hours, people will be getting a cheaper price than they might pay at the more traditional fixed-priced competitor. At peak times, customers will accept higher prices due to a lack of alternatives.

If we need to book a late flight we will accept that it is going to be more expensive, and so we put up with it due to a lack of alternatives.

This just isn’t going to be the case with grocery shopping. There is simply too much competition for this kind of tactic to gain any traction. You can imagine the marketing departments at Aldi and Lidl licking their lips if the supermarkets were to go down this route.

The rapid growth of the discounters was predicated on cheap and consistent pricing. Shoppers on a set budget were confident they could go to a discounter with a set amount of money each week and get what they needed without any unwelcome surprises, while the big four took far too long to realise that their rollercoaster promotions were infuriating shoppers and breaking down consumer trust.

By and large they have learnt their lessons from this period, and are clawing back shoppers with much simpler and clearer pricing and promotional strategies. They aren’t about to chuck all that away again simply because they have some new fancy electronic shelf-edge labels to play with.