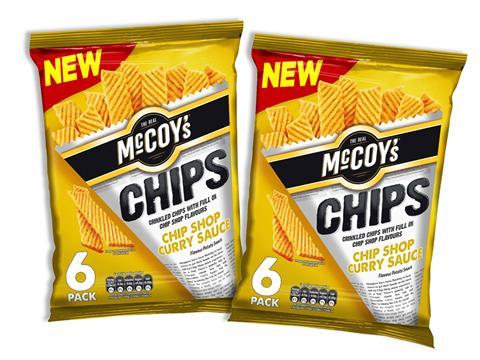 Why: McCoy’s has been buoyant of late, adding £8.4m extra value sales last year - an 8.5% rise to £107.2m [Nielsen 52 w/e 31 December 2016]. While a revamped strategy, new-look packaging and a multimillion-pound push all played their part, so too did NPD like Chips. The crinkle-cut sharing range launched last autumn to deliver a “full-on chip shop experience” to the potato snacks category. This variant arrived in February to join Sea Salt and Salt & Vinegar.

Consumer verdict: The easily recognisable branding and “eye-catching” presentation prompted a great deal of pre-trial enthusiasm among our shoppers. Few were disappointed after tasting, with the majority describing the crisps as “fun”, “moreish”, “flavoursome” and “a good size”. Some felt the product was too brittle and lacked flavour, but overall it received much praise - in part for being “different”. Our testers felt this McCoy’s option was superior to many of its rivals - leading it to score well above the category norm.