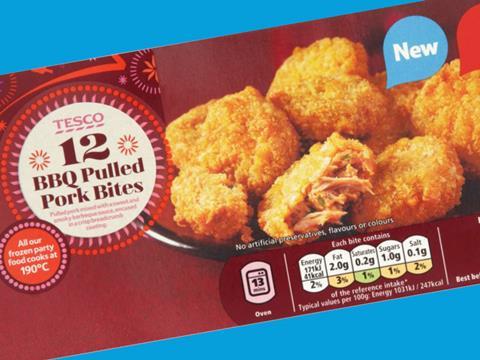 Where: Frozen Meat Based - Meal Centres

Why: Pulled pork is one of the food trends of the decade - last year achieving one of the ultimate markers of mainstream popularity, when Pulled Pork in a Sticky BBQ Sauce won Walkers’ Do Us A Flavour crisps campaign. Launched last autumn as part of Tesco’s party food range, this frozen product promises ‘pulled pork mixed with barbecue sauce and red onion in a crispy breadcrumb coating’.

Consumer verdict: This product generated a certain amount of intrigue, with an average level of pre-trial interest, but many consumers were disappointed after sampling. Although the crispy coating attracted positive comments, some respondents described the filling as “mushy” and the pork as “sour-tasting”, and thought there was too much barbecue sauce. Although 70% of testers felt the bites offered something new and different to the category, that did not translate to purchase intention. Even in the South, where the product was slightly more well-received, its total score was below the average for the category.