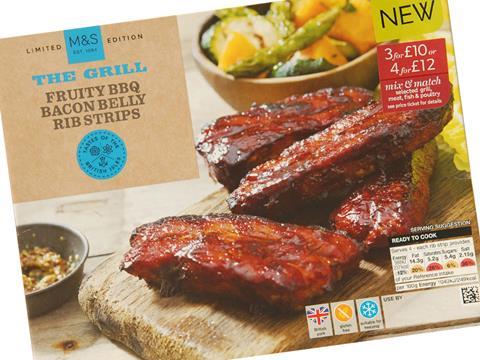 
Why: Also including the likes of Pork Belly Hog Roast, Kentish Apple Sauce & Crackling Crumb and Lamb with Orange Blossom & Pomegranate Glaze, M&S’s limited edition range The Grill is designed for adventurous consumers wanting to take their garden meat fiesta to the next level. This product offers something to BBQ kings who can’t get enough of the pig, but want to move beyond simple sausages and plain old pulled pork.

Consumer verdict: As with many M&S products, there was a reasonable level of anticipation before trial, thanks in part to the attractive and eye-catching packaging. But while some testers thought the meat had a melt-in-the-mouth quality, far more were underwhelmed, calling it too fatty, too salty, and too expensive. Only 8% said they would buy it regularly, while 37% said they never would. Fifty-six per cent, though, did see it as an occasional purchase. Its overall score of 29 placed it eight points below the category norm.