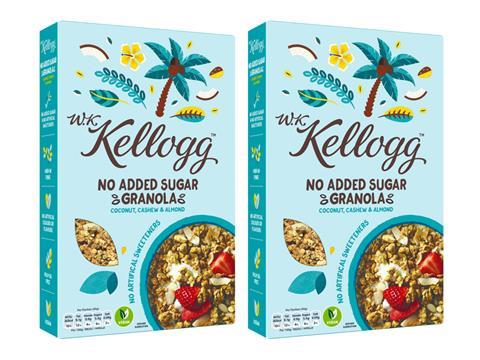 Why: In January, Kellogg’s rolled out WK Kellogg - a vegan-friendly cereal range featuring organic and no-added-sugar variants. It landed on shelf in January in time to tap post-Christmas demand for plant-based products, as Veganuary enjoyed its biggest month yet. Part of Kellogg’s Better Starts Plan to encourage healthier eating, WK includes two no-added sugar granolas: this one and Apricot & Pumpkin Seeds.

Consumer verdict: The colourful design and Kellogg name generated strong interest among our shoppers. Upon testing, the cereal was best received in the north and among younger consumers. There was approval of the “nice flavour combination” and “strong nutty taste”. The premium price was the main cause of a slight drop in pre-trial purchase intention, though there was also criticism of the “bitty” texture.