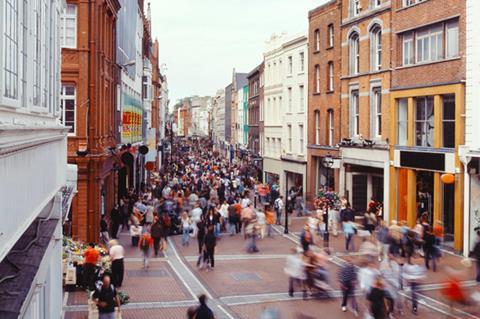 Traditional retailers are paying about eight times more in business rates as a proportion of their earnings than their online counterparts, according to analysis.

For every £100 earned by shops in Britain, excluding any online sales and fuel, £2.91 is payable in business rates, while for online retailers the figure is just 34p, according to real estate advisers Altus Group.

It means physical retailers are paying 755% more per earnings, according to the company.

The figures come amid disagreement between major retailers over the need for an online sales tax. In a letter to Chancellor Rishi Sunak last week, Marks & Spencer chief financial officer Eoin Tonge said an online sales tax would “damage shops and our high streets” by making it harder for them to “invest in the digital transformation required to survive”.

However, Sainsbury’s CFO Kevin O’Byrne urged the government “to introduce an online sales tax that funds a reduction in business rates for retailers of all sizes, and levels the playing field between physical and online retailers”.

The contrasting calls came a day before a three-month government consultation on an online sales tax closed on 20 May.

Disagreement between its members has made an online sales tax a thorny issue for the BRC, leading it to take no firm position one way or the other. It is understood its response to the consultation includes members’ views both for and against.

Altus Group argues that a 1% tax on online sales to UK customers, above an allowance of £2m, could raise about £1bn a year, which if ringfenced could fund a 9% reduction in rates for retail, leisure and hospitality.

Altus Group UK president Robert Hayton said “no solution will be easy nor perfect, but if left unchecked” the existing business rates system “could lead to the substantial extinction of the high street and the erosion of local communities”.

“Unless the tax-to-turnover disparity is addressed, it will widen,” he added.

The Association of Convenience Stores is also in support of a revenue-based online sales tax to fund a reduction in business rates. In its consultation submission, the ACS said the online sales tax should be applicable to businesses turning over more than £1m and click & collect orders should be exempt as they encourage trips to physical stores.

ACS CEO James Lowman said: “An online sales tax will help businesses trading on high streets, towns and villages across the UK to invest and grow, benefiting local communities, but it is just one of many changes needed to the business rates system.

“We urge the government to consider the online sales tax and will continue to work with officials on the detail of the policy and the Non-Domestic Rates Bill that was announced in the Queen’s Speech earlier this month.”

Shopkeepers’ Campaign chair Vivienne King said the need for business rates reform was so urgent that retailers could not wait for the outcome of the consultation. “The government is holding out the prospect of business rates cuts if they introduce an online sales tax sometime in 2024 or beyond, but shops were promised business rates cuts in 2019 and we need those cuts right now,” she said.

She pointed to the recent collapse of McColl’s into administration as evidence, as well that of Sofa Workshop and shirtmaker TM Lewin.

“We have answered the government’s technical questions about how an online sales tax could work, and of course it could be effective if applied to reducing business rates,” said King. “But online retail is not solely responsible for the decline of the high street, business rates are.”