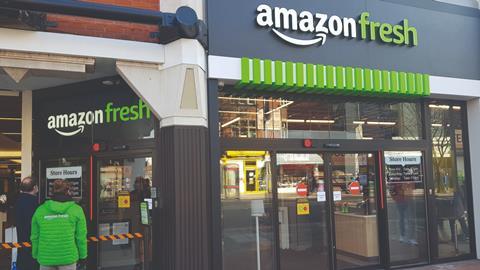 Will Amazon’s no-checkout store change how we shop?

The Amazon Fresh store in Ealing is already proving popular, with more set to follow – so is it a game-changer for UK grocery?

If the queues outside the new Amazon Fresh store in Ealing, west London, are anything to go by, the e-commerce giant’s first foray into physical retail in the UK is already a success. Indeed, Mintel research reveals three quarters of Brits say they would shop at one. And the opening is set to be followed by many more across the capital.

But will the rollout of Amazon Fresh be a game-changer for UK grocery? Can Amazon translate its dominance of online retail into footfall? And how should rivals respond?

The timing of the opening – in the middle of a global pandemic – is something of a double-edged sword. On the one hand, Andy Halliwell, retail analyst at Publicis Sapient calls it “near perfect”.

“There has been a wave of investment in touchless technologies as safety and hygiene became the highest priority for grocers and shoppers,” he says. “The idea of being able to walk out of a store with your daily incremental shop without having to touch a checkout, screen or keypad will be hugely appealing for many.”

Furthermore, convenience retailers in suburban locations such as Ealing have enjoyed huge sales spikes during lockdowns, according to Kantar, indicating people are increasingly shopping local.

But Amazon’s broader property strategy for its store rollout could work against the rollout.

“Amazon’s main focus is location – primarily in public transport hubs,” says Kris Hamer, VP Research at Retail Insight. “But more people in the UK are working from home during lockdown and there is a lot of uncertainty around whether this will be a more permanent shift post-pandemic.

“With the anticipated increasing tax burden on businesses and prolonged economic recovery, companies will be looking to shed costs,” he adds. “Under-utilised office space will be high on the target list. This could impact Amazon’s strategy.”

The convenience of the ‘Just Walk Out’ technology – where customers simply scan their mobile on arrival, pick up items and leave – is clearly a significant draw, particularly during the lunchtime squeeze. In the US, a recent consumer survey found 60% want a ‘Just Walk Out’ Amazon store in their area. Rivals will have to respond, says Yair Holtzer, VP of business development at checkout-free tech provider Trigo. “We’ve passed the point of ‘let’s see if it works,’” he says. “For rivals it’s now the north star of customer expectation. It will become the industry standard.”

Amazon’s is not UK grocery’s first cashier-less store, of course. Sainsbury’s in 2019 trialled the “UK’s first till-free grocery store” at Holborn Circus. Customers’ only option was to scan and pay in its SmartShop app, though items still had to be scanned, and payment approved. It didn’t last long. “It’s clear not all our customers are ready,” Sainsbury’s said.

Tesco is perhaps closest to competing, partnering since late 2019 with Trigo on Amazon Go-like tech. A test site has been operational in Tesco’s Welwyn Garden City HQ for nearly a year, with no word as yet on a public-facing trial.

“It shows the gulf between them and Amazon that the latter has now been able to roll out its model internationally,” says Amazon expert Miya Knights.

“The [big four] grocers have known this was coming for a long time. But instead of taking the fight to Amazon, they’ve taken a wait-and-see approach.

“I can understand how the pandemic has pushed the checkout-less store down their priority list. Yet, you have to wonder why it didn’t for Amazon. Amazon knows there are currently unacceptable levels of friction associated with food shopping particularly, which – though the grocers know this too – means it’s still ripe for disruption.”

Of course, Amazon is seeking and getting much more out of the effort than just sales. The technology enables it to quickly test merchandising, pricing, track shopper routes around a store, know when an item has been picked up and put back.

“Their end goal is to get insights,” says Holtzer. Ones that can be applied online, and quite possibly in a full-scale supermarket.

For the big four, the time for a wait-and-see approach appears to have passed.