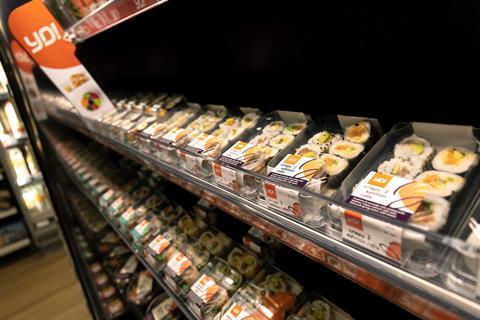 The Co-op has become the latest retailer to agree a supply deal with Yo Sushi to stock its retail range.

The convenience retailer is stocking 10 Yo products at its new On the Go format store in Moorgate, London. The store, which opened this week, is the Co-op’s third On the Go ‘ultra-convenience’ store following launches in Manchester’s Piccadilly Station Approach and America Square in London.

The Yo range includes vegan sushi, chicken katsu bites, crispy salmon rolls and salmon deluxe sushi packs. It is currently only available as part of a trial at Moorgate, but a Co-op spokesman told The Grocer it could roll out the range to other stores with high demand for food to go, such as those on university campuses.

The Moorgate store is focused on offering ease, speed and convenience for commuting consum-ers in search of breakfast, lunch or dinner. It is situated next to Bank underground station.

“The aim is to further elevate our sushi proposition for customers in search of more authentic products, bridging the gap between our core sushi offer and sushi counters in the market,” said Co-op food to go concessions buyer Emily Young.

Earlier this month, The Grocer revealed Yo Sushi had netted a deal with Sainsbury’s to stock branded pre-packed sushi in 350 stores.

The push into retail has been enabled by Yo’s acquisition of Waitrose sushi supplier Taiko Foods in 2018.

Speaking about the Sainsbury’s deal, Yo CEO Richard Hodgson said: “I’m agnostic about route to market. We’re trying to introduce more people to fresh, great-quality sushi, whether in our restaurants, at a kiosk or in a fridge.”