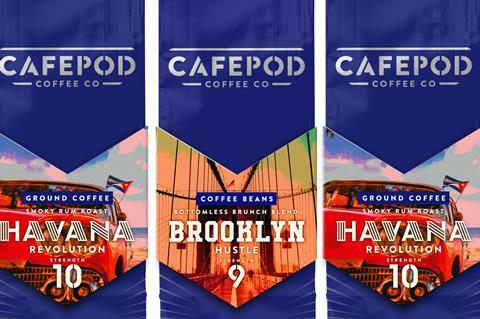 Waitrose is targeting younger coffee drinkers with trendier brands and variants, after stripping back its hot drinks as part of a larger ranging review.

Having delisted about 40 SKUs in recent weeks – including from big names such as Nescafé, Taylors of Harrogate and Lavazza – Waitrose has added several new ground and bean variants by more fashionable mid-tier players [Edge by Ascential 6 w/e 29 May 2019].

This includes CafePod’s four-strong Downtown range, which launched in June 2018 as pods only, taking inspiration for its name and look from hip craft brewers. Eight new ground and bean lines this week completed their rollout exclusively into Waitrose, joining ground options from CafePod’s core selection.

The listing came at “an exciting time for the supermarket coffee aisle” said CafePod brand manager Conrad Paxton. “Waitrose has continually outperformed in ground and beans – and the rationale from the buying team was that the differentiated brand positioning of CafePod is something that will provide incrementality to the category.”

The brand’s typical shopper was “more youthful than the traditional Waitrose consumer and will bring more dynamic, younger people into the aisle” Paxton added.

In another exclusivity deal, the supermarket has also given shelf space to the new London Fields range of ground coffee from Cafédirect. Unveiled at the end of April, it is made with beans sustainably sourced from Honduras, DR Congo and Indonesia, and is packed in home-compostable bags.

“We believe this range will attract younger shoppers who are looking for a coffee that leads on taste but has genuine ethics and sustainability behind it,” said Cafédirect CEO John Steel.

The listings come amid Waitrose’s ongoing ranging reset across more than 30 categories, including tea and coffee.