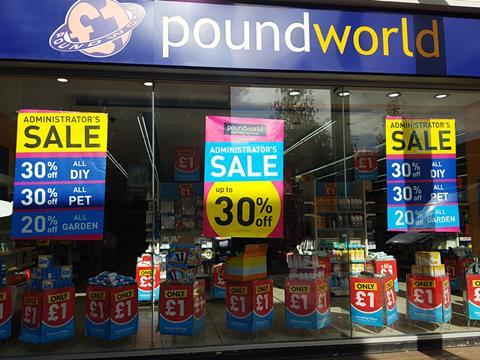 Poundworld’s remaining 230 stores are to close on 6 August if a buyer cannot be found.

Staff have been told stores will cease trading from that date if an agreement cannot be reached with the last bidder interested in saving branches.

That bidder is understood to be Steven Smith, who founded rival Poundland in 1990 before selling it in 2002.

About 5,100 jobs and 335 stores were put at risk when Poundworld went into administration on 11 June.

Ninety-eight of about 270 head office posts were axed on 18 June.

“We’ve been given the date as 6 August when we cease trading if this last buyer doesn’t get the deal done,” a source told The Grocer.

Announcing the latest closures last week, it said: ‘The closure of these stores will not impact the potential sale for part, or parts, of the remaining business, with discussions continuing with interested parties. This includes for the head office and distribution centre. The administrators will continue to progress these discussions over the coming days.’

Poundworld founder Chris Edwards, who sold the variety discounter to current owner TPG Capital in 2015, pulled out of the running on 4 July, saying his best offer had been rejected by Deloitte. He had been looking to buy 186 stores, saving around 3,000 jobs.

The chain entered administration after talks collapsed with prospective buyers of the business as a whole, including RCapital and Alteri Investors. That followed a restructuring plan under which 117 branches were set to close.