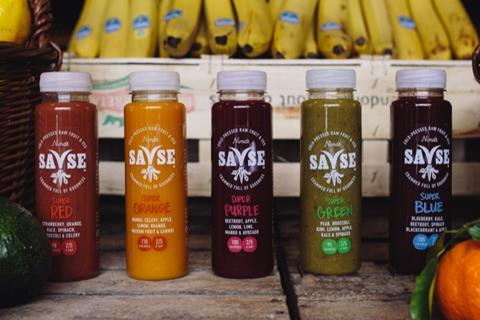 Savsé Smoothies has called in the administrators, The Grocer can reveal.

Declining sales, financial pressures from Brexit and the loss of a major listing in Boots set it on course to collapse, according to industry sources.

The business has now fallen into administration and officially appointed firm Smith & Williamson.

Savsé “had been experiencing financial difficulties for quite some time and found out last month that its principle investors were unable to provide any further funding”, said joint administrator Colin Hardman.

“As a consequence, the board, together with the assistance of Smith & Williamson LLP, had been seeking to find a buyer for the business. Discussions were in progress and the board of directors were very much hoping to complete on a sale last week. However, no acceptable offer was put forward.”

Numerous members of staff including its former CEO Paul Gurnell have left the business over recent months, leaving a diminished crew manning its London office, it is understood.

Gurnell told The Grocer he had resigned some months ago for a “new and exciting role”.

The smoothie brand was founded in 2013 by businessman Guka Tavberidze, and grew quickly, gaining listings in the likes of Tesco, Waitrose and Boots.

A significant amount of the brand’s manufacturing took place in Europe, meaning when the Brexit vote hit the value of the pound, margins and profitability were squeezed.

And despite its relatively large distribution, the brand struggled to keep up in grocery, competing against big names such as Naked and Innocent. Latest data shows value sales of Savsé’s smoothies plunged 13.7% to £5.7m in the supermarkets over the past year [Nielsen 52 w/e 7 September 2019].

The business has been loss-making for some time. Its most recent financial results, for the year ending 30 September 2018, show a trading loss of £8.4m, compared to £6.4m the prior year.

The balance sheet reveals it owed £4.2m with interest to an unnamed “substantial shareholder” who loaned money to the company in 2014.

Crucially, its latest results show Savsé had breached a covenant with an invoice financing facility, placing it at the mercy of the lender. AGC agreed at the time “to support the company and provide such facilities as the Company requires in order to carry on trading”.

Savsé products are still being sold in Tesco, Sainsbury’s and Waitrose. However, at the time of writing no one was answering the phones at Savsé’s HQ. The brand’s Twitter account last tweeted over a month ago, on 22 September.

The Grocer has approached AGC Equity Partners and Smith & Williamson for comment.