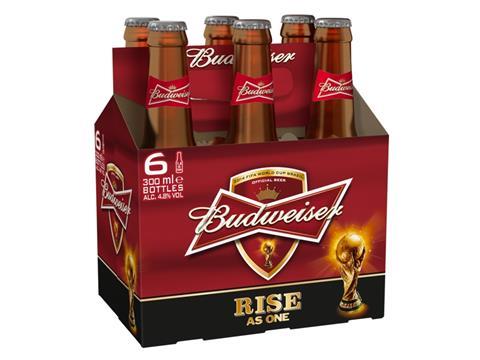 Inge Plochaet, BU president, AB InBev UK said the company was delighted with the UK performance. “The strong performance of Budweiser was supported by its position as official beer sponsor of the FIFA World Cup 2014 which included the promotion of a limited edition gold aluminium bottle featuring the iconic FIFA World Cup Trophy,” she said.

The World Cup boost had provided opportunities to build brand equity, not just in Brazil, but in markets around the world, the company said, and this was likely to be reflected in the full-year results.

However beer volumes across Europe fell 4.8%, while sales in the US were also disappointing, with volumes falling 0.8%.

Ebitda grew 10.1% over the year, with total sales revenue up 6.8%, and revenue per hl growing 4.7%, which the company attributed to revenue management and premiumisation. Lower commodity prices and efficiency gains helped cost-of-sales performance, along with a US$223m adjustment to the liabilities of a US post-retirement healthcare plan.

Meanwhile the US market saw only sluggish growth, with flat ebitda, and revenue rising only 0.9% as volumes declined. However, the company remained optimistic for the outlook for the full year, arguing that a stronger economy in the US was likely to lead to improved volumes. It also expects further strong sales in Mexico and Brazil and “solid volume growth” in China, but revised its distribution costs, and said increases in sales and marketing investments were likely.