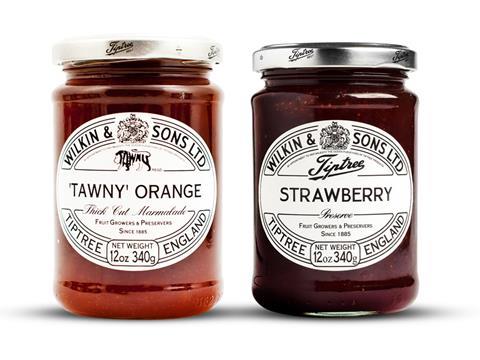 Sales at Wilkin & Sons Limited, the maker of Tiptree jams and marmalades, jumped up 8% in 2017, with new product launches pushing sales growth.

The proceeds of the sale of Wilkin & Sons’ northern housing land, Nine Acres, are to be reinvested into the current Essex factory site to improve the firm’s long term future with modern production facilities and flexible lines.

Top-line growth was encouraged by the addition of new lines to the Tiptree business, including fruit-flavoured gin liqueurs and candles.

Just this week the preserves manufacturer has entered the snacking market with a six-strong range of fruit and vegetable crisps under its jam and marmalade brand.

It said that newly salted caramel and chocolate spreads were “well received” and the firm has also recently produced a new range of reduced sugar jams.

The accounts stated: ”While indulgence will always be a key component of our business, a growing fresh fruit offering and a focus on lower sugar options begins to move the emphasis away from historical core business.”

Tiptree retail sales were boosted by encouraging results in key export markets, such as Italy, USA, Japan and Germany following new distribution deals, with a 15% sales increase outside of the EU to £3.2m.

It said, however, that stopping production of its Fruit Spread, has had an impact, particularly on exports in Canada and Brazil.

The Tiptree patisserie brand suffered in 2017 as a result of significant increases in raw material costs and Danbury Fine Foods which impacted profits.

The weaker value of the pound in 2017 added to raw material costs, with significant spikes in the price of dairy and eggs.

However, stripping out the impact of the land sale, operating profits still more than doubled from £1.5m to £3.2m in the period as it focussed on production efficiencies and reducing waste.

The annual results were the first since the promotion of Scott Goodfellow to joint managing director, alongside, Chris Newenham, at the start of 2018.

Goodfellow told The Grocer: ”We have seen an encouraging year and our focus remains on growing, making, and selling high quality foods.

“Our innovation in Fruit Gin Liqueurs, nut-free Chocolate & Caramel Spreads, and Mayonnaise has started well, and we have seen positive signs in our first city centre Tiptree Tea Room at Chelmsford. We continue to invest in our farm, in our factory, and in our people, to sustain and develop our business for the long term.”

The firm suggested a positive outlook, saying it hopes a “continuing programme of new product development” can prompt growth in 2018.

However concerns remain over a “lack of clarity” surrounding Brexit and subsequent worries over the long-term access to EU labour. Price volatility also remains a concern for the business looking ahead.