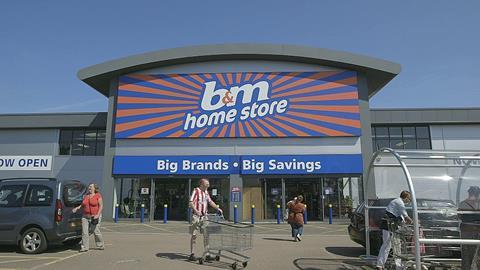 B&M Bargains’ shares were up by over 5% this morning after it reported a like-for-like sales uplift of 4.5% in the 13 weeks to 27 December.

The chain, which trades at B&M European Value Retail, saw overall sales rise by 28.8% during the period to £527.9m, reflecting the rapid expansion of its store estate and its 2014 purchase of German chain JA Woll.

At the end of the quarter the UK business had 417 stores trading, having opened 24 stores over the last 13 weeks. B&M expects to open at least 50 net new stores in the UK this financial year, and have a strong pipeline of at least 45 new stores across the UK for the following financial year.

While the company cautioned that conditions remain “competitive”, particularly in fmcg products, it insisted its sourcing strategy and store expansion plans will allow it to increase market share in both the UK and Germany.

Chief executive Simon Arora said: “The group’s third quarter trading performance has been pleasing despite the competitive market. Our Christmas decoration and gifting ranges enjoyed a good rate of sell-through and we believe we are becoming a destination store for these important seasonal categories.

“The 44 new stores opened by the end of the third quarter have also traded well over their first Christmas season.  We expect to meet market expectations of revenue and profit growth in our maiden year as a quoted company.”