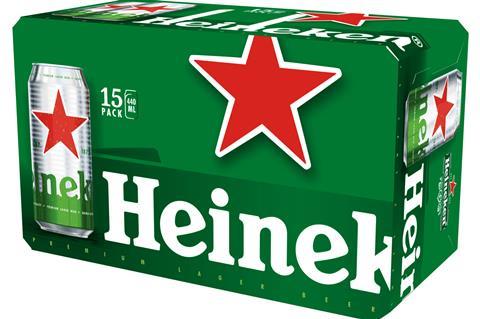 Heineken (HEIA) has reported a 2.3% organic increase in beer produced and sold during the third quarter, with the “strong performance” driven by double-digit growth in Asia-Pacific.

So far this year, the world’s second largest brewer has seen total beer produced and sold, or volumes, up 2.8% year-on-year on an organic basis.

Heineken brand volumes rose 7.4% in the quarter, 7% in the first nine months of the year, on the back of double-digit rises in Africa, Middle East and Eastern Europe and the Americas.

Geographically, Asia-Pacific delivered the strongest performance, with volumes up 14% in the third quarter.

In Africa, Middle East & Eastern Europe volumes rose by 1.6% during the three-month period, while in Europe were up 1.6%.

The only region witnessing a slowdown in the third quarter was Americas, with beer volumes down 0.5%, due to high-single digit decline in the US.

“During the third quarter, our beer portfolio delivered solid volume growth of 2.3% in the context of a challenging comparison base given a very good summer last year,” CEO and chairman Jean-François van Boxmeer said.

“The growth of Heineken accelerated to 7.4%. We are seeing increased volatility across a number of our markets, which we assume to continue for the rest of the year.

“We continue to invest for the long term benefit of all our stakeholders. We expect to grow operating profit organically around 4%.”

French retail giant Carrefour posted its third quarter results after the markets closed last night, with like for like sales up 2.3% in the period.

Group sales (including VAT) were up 1.5% to €20.2bn constant exchange rates. After taking into account an unfavorable exchange rate effect of -0.8%, mainly due to the depreciation of the Argentine Peso, the total sales growth at current exchange rates was 0.7%.

On a like-for-like basis, gross sales in the first nine months grew by 3.1%.

The Q3 performance in 2018 of 1.6% growth was boosted by strong food sales, thanks to promotional actions, particularly in hypermarkets, and World Cup and heat wave effects.

Hypermarket sales fell 3.6% in the period, while supermarkets were up 1.5% and other formats up 2.2%.

It also displayed good commercial momentum in Latin America (with sales up 12.8% LFL), driven by the highest LFL growth at Carrefour Retail in Brazil in five years.