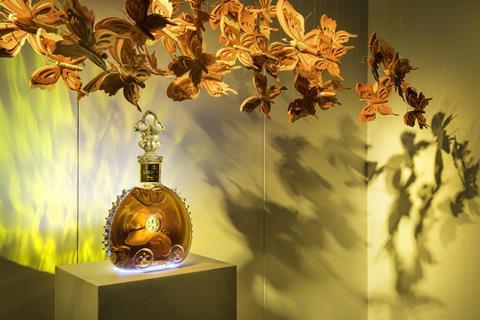 House of Remy Martin sales were up 13.2%, driven by strong sales growth in Asia-Pacific, notably Great China, Singapore and Japan.

The group said the growth resulted from its “brand-upscaling” strategy during the year and significant media investments.

Its Liqueurs & spirits division suffered a 1% drop during the year, thought this was attributable to the deconsolidation of its Passoa brand into a JV, without that the division grew 4% in organic terms.

The group said this improvement is attributable to an increase in gross margin fueled by the performance of spirits and a control over costs increases.

Reported operating profits growth of 4.1% included a negative currency effect of €18.5m and a loss of €2.6m on two single malt whisky brands in acquired in January 2017.

As a result of its strong annual performance, Remy Cointreau has revised its target to increase current operating margin over the three years to March 2020.

It now anticipate a cumulative increase of 2.4-3 percentage points compared with a target of 0.8-1.8 set last year.

For 2018/19 the group expects another year of growth in its organic operating profits at constant exchange rates.

Despite the earnings upgrade, the shares have sunk 4.5% to €121.80 in early trading this morning.

Sean Coyle will join Origin on 1 September 2018. He currently serves as group finance director of UDG Healthcare, the international healthcare services provider. Prior to UDG, he was CFO at Aer Lingus and, before that, held senior management positions at Ryanair.

Commenting on the appointment, Rose Hynes, Chairman of Origin said: “His broad financial and commercial experience make him an excellent choice for Origin as we prepare for our next phase of growth”.

Coyle added: “I very much look forward to working with the Origin team and contributing to future growth at this exciting time in the group’s development.”

In wider retail, House of Fraser has announced plans to close 31 of its 59 shops as part a deal drawn up to save the latest high street name under pressure.

Under the plan 2,000 House of Fraser jobs will be lost, in addition to 4,000 brand and concession roles.

The store closures include the company’s flagship London Oxford Street store. Creditors will vote on the insolvency plan on 22 June.

On the markets this morning, London prices are not yet available because of a ”“techincal issue”. Trading is expected to start at 9am.

WH Smith (SMWH) surged 7.5% to 2,124 after another strong performance in its travel division sent its overall third quarter sales up.

African meat producer Zambeef Products was up 3.7% to 11.25p after seeing its annual profits grow on the back of currency inflation.

Applegreen (APGN) dropped 1.3% to 538p after issuing a trading statement ahead of its AGM saying its 2018 performance had been affected by cold weather and rising fuel prices.