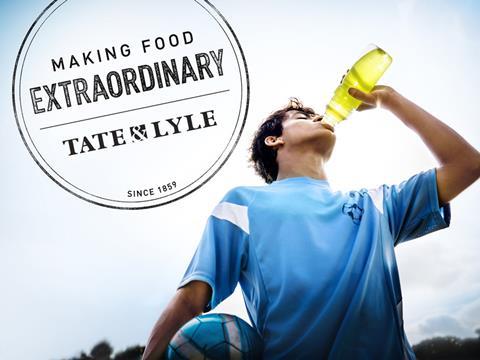 The profit growth game despite a 2% dip in full year sales (1% down at constant currency) to £2.71bn.

In particular Tate & Lyle saw a 10% drop in sales of its key Sucralose product, with volumes down 12% reflecting “the sale of excess investory in the first half of the comparative year”.

Sales edged up 2% in its food & beverage solutions division and dropped 2% in its primary products division.

Headline profit figures for Tate & Lyle were also boosted by lower exceptional costs through the year.

It was sharpen focus on its customers and key categories of beverages, dairy, and soups, sauces and dressings; accelerate portfolio development; and simplify the business to deliver US$100m of productivity improvements over four years.

For the year to 31 March Tate & Lyle guided on mid-single digital earnings per share growth in constant currency, albeit this will be constrained by rising energy and transport costs in North American and strong commodity pricing in the 2017/18 financial year.

The revenues growth was driven by the rollout of PayPoint One, with 8,550 sites live at 31 March 2018 and 9,026 today. It also reached agreements with Nisa and Booker to provide back office links for its PayPoint One platform.

It said it had also made good progress with its cards proposition and saw a strong performance in UK bill payments & top-ups.

Headline revenues were up a more modest 0.8%, with net revenues down 3.5% to £119.6m reflecting the sale of its mobile paytment business and droip and Collect in December 2016, which were included in the previous years’ figures.

Operating profit before impairments and business disposals grew 2.3% to £53.5m, with profit before tax of £52.9m, which PayPoint said was slightly ahead of expectations

Profit before tax fell 0.8% on a continuing basis to £52.9m and was down 23.4% on a statutory basis because of the one-off sale of Mobile and Drop and Collect businesses, income from the former Collect+ joint venture agreement and a lack of financing costs.

PayPoint also said it saw a strong pipeline of parcel opportunities, with contract discussions underway with the intention to have at least one new carrier live before Christmas this year, “good momentum” in multipay and its business in Romania is “performing well”.

CEO Dominic Taylor commented: “There is now strong momentum across PayPoint One, MultiPay and Romania, in addition to a compelling Parcel proposition reflected in a strong pipeline of client deals, all of which will underpin the future growth of our business.”

However, he warned that non-recurring items will impact profits in the current financial year, including the closure by the Department for Work and Pensions of their Simple Payment Service worth £4m a year in net revenue and the second-year impact of £1m reduction in net revenue from the agreement to lower Yodel parcel fees.

He added: “Despite these headwinds, and whilst final performance for the forthcoming financial year will be influenced by the timing of and volumes from new parcel contracts, the board anticipates a progression in profit before tax in this financial year as the growth drivers in our business continue to develop.”

Elsewhere this morning, C&C Group (CCR) has announced its chairman Sir Brian Stewart will step down as chairman at its AGM on 5 July after eight years in the role.

Booker and Tesco exec Stewart Gilliland, who joined the C&C board as a non-executive director in 2012, has agreed to succeed Stewart as chairman.

Gilliland was chairman of Booker Group from 2015 until its acquisition by Tesco (TSCO) in March 2018, following which, he was appointed to the board of Tesco plc as a non-executive director. He is also Senior Independent Director of Mitchells & Butlers (MAB).

AIM-listed vending machine operator Uvenco UK has had trading in its shares suspended pending clarification of its financial position. The company is in talks with a buyer for its trading assets.

Marks & Spencer investors received some respite yesterday despite the high street stalwart posting a 62% drop in profits amid tightening food margins, falling cothing and home sales and the cost of shutting stores.

The shares ended the day up 5.2% to 306.9p though as M&S’ forecast for 2018/19 were not as bad as had been feared and its progress on cost cutting was moving at a faster pace the some in the market expected.

Greencore (GNC) also continued to rise after its own first half results on Tuesday, climbing another 6.3% to 175p.

It was not such a good day for Dairy Crest, which dropped 7.7% to 495p despite announcing a 10% sales jump in the year ending 31 March, driven by the continued strong performance of the Cathedral City brand. Shares fell back as Dairy Crest announced a new share placing of around 10% of its current issued share capital to raise cash to plough into its Cheese business.

The overall FTSE fell back 1.1% from record highs to 7,788.4pts on uncertainty around US and China trade talks.