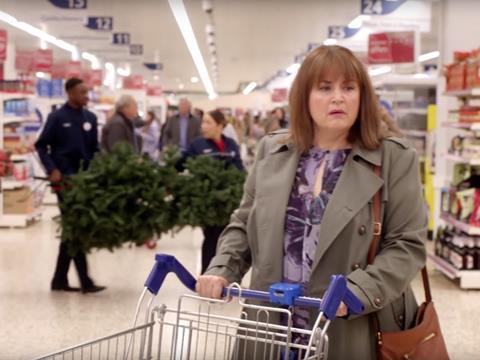 Tesco (TSCO) has reported UK like-for-like growth of 1.4% in the 19 weeks to 7 January as market share gains and volume growth boosted sales.

Tesco reported its first quarter of UK market share gain since 2011 and its eighth consecutive quarter of like-for-like volume growth.

Over the festive period, food like-for-like sales up 1.3%, with significant market outperformance in fresh food

It saw good performance in clothing and toys, with sales up 4.3% and 8.5% respectively. However, its general merchandise performance, particularly online, was heavily impacted by not repeating last year’s Clubcard ‘Boost’ promotion, which had a 0.8% impact on UK like-for-like sales over the Christmas period.

CEO Dave Lewis commented: “We are very encouraged by the sustained strong progress that we are making across the Group. In the UK, we saw our eighth consecutive quarter of volume growth and delivered a third successful Christmas.

“Our fresh food ranges proved particularly popular, outperforming the market with great quality, innovative new products and even more affordable prices. Internationally, we have continued to focus on improving our offer for customers in challenging market conditions.

“We are well-placed against the plans we shared in October to become more competitive for customers, simpler for colleagues, and an even better partner for our suppliers, whilst creating long-term value for our shareholders.”

Tesco added it is “on track” to deliver at least £1.2bn group operating profit before exceptional items for the full year.

M&S (MKS) has reported a better than expected 13 weeks to 31 December, with group sales up 5.9% during the period.

Clothing & home sales rose by 3.1%, representing like-for-like sales growth of 2.3% - though 1.5% of this growth was due to the shift in reporting period owing to a 53-week financial year last year. General merchandise sales were boosted by substantially reducing promotions during the period, particularly on Black Friday, and stock into sale during the quarter declined by 7%.

Food sales rose by 5.6%, with LFL sales up by 0.6%. M&S said it saw a slightly later build to peak, as a result of Christmas Day falling on a Sunday. It added that it continues to grow market share, with “customers appreciating the quality, innovation and newness that distinguish our food”.

Steve Rowe, Chief Executive, said: “I am pleased with the customer response we have seen to the changes we are making in line with our plan for the business.

“As we look forward, our Q4 reported numbers will be adversely affected by sale timing and a later Easter. Against the background of uncertain consumer confidence the business remains focused on delivering the strategic actions announced last year.”

The John Lewis Partnership has released its Christmas figures this morning for the six weeks to 31 December, with both John Lewis and Waitrose growing sales by almost 5%.

Profit before Partnership Bonus, tax and exceptionals for the year ending 28 January 2017 is expected to be up on last year with lower pension accounting charges offsetting trading pressures on profit

Sir Charlie Mayfield, Chairman of the John Lewis Partnership, commented: “We traded strongly over Christmas with sales up nearly 5% and both Waitrose and John Lewis grew market share. Sales were particularly strong in the areas that have been the focus for product innovation this year, such as our Waitrose 1 premium range and John Lewis own-brand fashion. Our multi-channel capability has again proved its worth with online accounting for 40% of total sales in John Lewis.”

Booker Group (BOK) has reported a “good quarter” over Christmas, with group non tobacco sales up by 4.8% and non-tobacco like-for-likes up 5.1% in the 16 weeks to 30 December.

Chief exec Charles Wilson said: “”Booker Group continues to make good progress with like-for-like non tobacco sales up 5.1%. Our plans to Focus, Drive and Broaden Booker Group are on track. Budgens and Londis are making a solid contribution to the Group. We continue to help our retail, catering and small business customers prosper through improving our choice, prices and service.”

Associated British Foods (ABF) has reported 10% revenue growth for 16 weeks to 7 January 2017 on a constant currency basis, with growth across all its businesses.

The devaluation of sterling since the summer has meant that reported sales from continuing operations are up 22% at actual exchange rates.

Sales at its flagship clothing chain Primark were 11% ahead of those reported last year at constant currency driven by increased retail selling space. Sales were 22% ahead of last year at actual exchange rates.

AB Sugar revenue from continuing operations was 22% ahead of last year on a comparable basis at constant exchange rates. At actual exchange rates revenue was 38% ahead. As higher sugar prices, increased production in Africa, and further benefit from the performance improvement programme delivered a substantial increase in profit.

Its grocery made further margin progress, though ABF did not split out figures for the division. Twinings continued to achieve strong sales growth with particularly good performances in the UK, North America and Australia, and Ovaltine performed well in Asia. Margins at George Weston Foods in Australia were much improved and Allied Bakeries volumes remained strong but pricing and margins remain challenging.

Finally, meat processer Hilton Food Group (HFG) has updated the market on its full-year performance for the 52 weeks to 1 January 2017.

Hilton said the group has performed slightly ahead of expectations, reflecting growth in a number of markets, as well as the positive impact of foreign currency translation.

In Western Europe it said it has continued to grow the business, particularly in the UK, where it had a good last quarter, and also in Ireland. In both Sweden and Holland, sales have been slightly up, whilst in Denmark, sales were slightly lower reflecting consumer demand. In central Europe, performance has been in line with its expectations. Hilton’s joint venture in Australia continues to make “good progress”.

Hilton said its outlook for 2017 “remains positive”, with growth prospects underpinned by the recently confirmed expansion plans in Portugal and Australia.

The statement adds: “The group’s financial position remains strong, positioning us well for further expansion. Hilton remains well placed to deliver continued growth over the medium term and will continue to explore further opportunities to develop our business in both domestic and overseas markets.”

The FTSE was up yet another 0.2% to 7,290.5pts yesterday to hit a record-breaking 12 days of consecutive gains, although the market did tail off towards the end of the day after Donald Trump’s press conference comments hit pharma stocks.

In grocery, Sainsbury’s (SBRY) like-for-like Christmas grocery sales growth of 0.1% is behind its peers Tesco and Morrisons (MRW), but it was Sainsbury’s which rose 1% to 261.4p on the announcement yesterday.