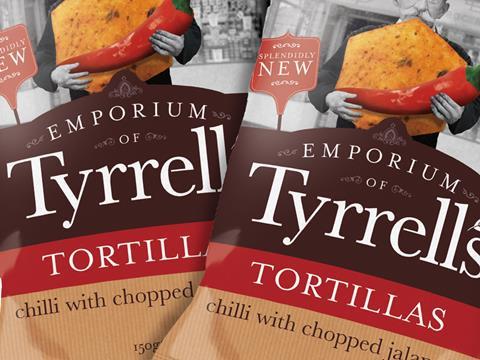 Revenues and profits have soared at crisp manufacturer Tyrrells after another year of international and domestic expansion.

The brand is also continuing to grow in the UK, with The Grocer’s Top Products 2015 (Nielsen 52 weeks to 7 November) finding it saw an annual 8.9% in volumes and a 5% price increase added an extra £5.1m in value sales during the period.

The booming revenues helped increase EBITDA (before exceptional items) by 44.3% to £11.5m during the period.

The accounts included exceptional costs of £1.45m during the year - £803k of which was related to costs relating to a customer dispute.

Tyrrells CEO David Milner said that the company now exports to 37 countries worldwide and the customer dispute related to ““contractual changes” in these international markets.

The crisp maker’s tax bill rose more than threefold during the year, rising from £190k to £647k.

Tyrrells was bought by Bahraini private-equity fund Investcorp for £100m from Langholm Capital in August 2013.