McCormick UK sales up in first period with French's & Frank's 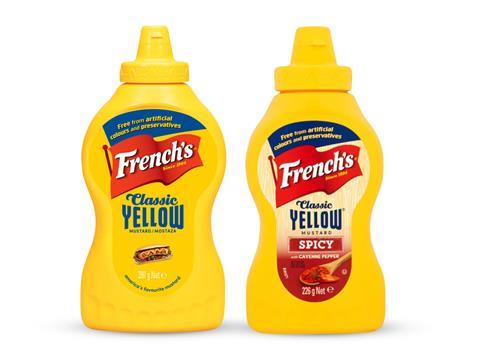 French’s commands 8.6% of the US mustard market but remains a smaller player in the UK

Schwartz owner McCormick’s UK sales rose 4.1% last year in its first reporting period to include the food assets it bought from Reckitt Benckiser in 2017.

UK sales for the US-based herb and seasoning powerhouse, whose sales are predominantly from its Schwartz brand despite the addition of Reckitt’s French’s and Frank’s Hot Sauce towards the end of its financial year, were just shy of £250m for the year ending 30 November 2017. The $4.2bn acquisition of Reckitt’s table sauces business was closed in August 2017 to transform McCormick into a “one-stop shop for condiment, spice and seasoning needs”.

French’s commands 8.6% of the US mustard market but remains a smaller player in the UK. RT French’s Food Company, which covers both brands, recorded £7.8m in sales in 2016.

Last year, the table sauce maker pledged to realise the “full potential” of the US condiments brand in the UK, describing it as a “key market”, despite suffering major sales slumps on core lines.

Increasing competition in the consumer sector and the “challenging economic environment” caused operating profit to decline, falling 22.2% to £12.1m, despite the sales improvement.

McCormick’s UK pre-tax profits jumped from £11.1m to £38.7m for the year, but this was heavily weighted by a £26m dividend it received from a subsidiary company.

“Operating profit declined due to the challenging economic and competitive environment, particularly in the consumer division,” the directors said in a strategic report accompanying the annual accounts.

“Increased commodity costs across a number of raw materials contributed to higher costs during the year, exacerbated by the impact of negative currency movements.”

On the results, a McCormick spokesman said: ”McCormick has shown steady growth in EMEA and our UK audited accounts show the results from our statutory businesses in the UK. On a reported basis we do not disclose our results by country within the region and there may be differences between statutory and reported results.”

Much of the growth had been driven by RB food brands, McCormick CEO Lawrence Kurzius said, adding that Frank’s and French’s portfolios had recorded incremental growth.