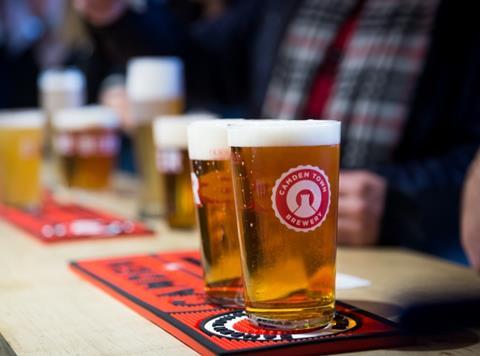 Sales have surged at London craft brewery Camden Town, latest figures reveal, with the trendy brand mounting a large-scale assault on the off-trade.

Revenues for the brand, which was snapped up by brewing behemoth AB InBev in January 2016, grew £2.53m to £16.9m for the year ending 31 December 2016, according to results filed with Companies House this week.

It had been “another very successful year” said Camden founder Jasper Cuppaidge, with turnover growth achieved through “customer expansion and increased marketing investment to further promote the Camden brand among consumers” and the expansion of its “organisational structure”.

Operating profits for 2016 took a dive into the red, falling from £800k last year to a loss of £643k, but Cuppaidge attributed this to “increased administration expenses, representing higher levels of marketing investment and staff resourcing to support future business growth”.

The brewer’s sale to AB InBev would “provide the potential for even more rapid expansion in the future” said Cuppaidge.

It launched its first national TV ad campaign in September, called Raise Hells, featuring “real Londoners who in their own way embody the open, diverse and unconventional spirit of the borough of Camden”.