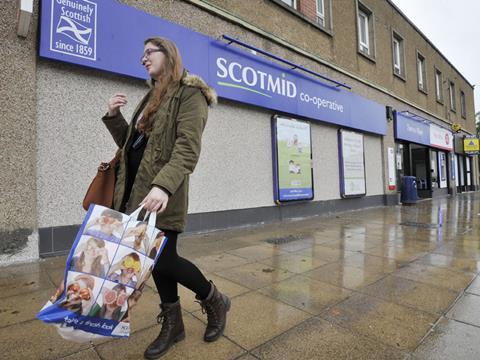 Scotmid Co-operative has reported trading profits of £5.7m for the 52-week period to 30 January.

This was 4% up on the previous 53-week financial year, with the business consistently outperforming the market, it said.

Turnover was down £12m to £371m with gross profits falling from £100m to £98m due to shorter trading period and closure of seven Semichem health stores.

The society now has a retail estate of 350 outlets, including 195 Scotmid food stores and 11 Lakes & Dales branded c-stores.

Scotmid chief executive John Brodie said trading strengthened in the second half of the year, with comparable retail sales ‘very positive’ relative to the sluggish market.

“However, one less week and the impact of some store closures saw total turnover reduce but we recorded a notable strengthening of our balance sheet with net assets now in excess of £91m,” he explained.

“In the year ending January 2016, the Scottish Retail Consortium reported average like-for-like sales down 2.4% reflecting factors such as low consumer confidence, price deflation and poor summer weather. The society’s retail businesses consistently outperformed the market in 2015, with successful implementation of our new Semichem strategy and the delivery of innovation initiatives in Scotmid’s community convenience stores.”

Initiatives included the rollout of in-store bakery counters to a further 24 stores and the artisan bakery Breadwinner added to 20 stores.

Own-label products were developed to support the bakery and food-to-go offer including Candy Crisp doughnuts and Caffe Riva coffee.

“Successful initiatives in food included bakery, new food-to-go lines and the improving range from our buying group FRTS, which helped to offset the impact of food price deflation and increased competition,” Brodie said.

According to the annual report, other developments in the food offer included a reset of chilled ranges and price promotions on produce.

“The Co-op range was supplemented by the further development of our local offer, including high-quality fresh fruit supplied by Castleton Farms and competitively priced milk supplied by a Scottish dairy,” the society reported.

Cost control and stock management also improved and investment in store infrastructure continued with the programme of Lakes & Dales refits in the former Penrith Co-operative stores completed in early 2015.

Scotmid said it had made ‘significant investment’ in store energy efficiency measures, and had achieved greenhouse gas emissions target ahead of plan.

The merger with Seaton Valley Co-operative was completed in October, adding two further food stores and strengthening the society’s presence in the north, refitted to Lakes & Dales branding. The Keswick store had to be refurbished after it was severely damaged by winter floods.

Brodie said the year also saw improvements to the society’s member offer and democratic working practices, including the launch of a new membership app, which provided exclusive offers and information.

“Last year I predicted a challenging marketplace and in reality, the retail markets we operate in performed worse than anticipated, not helped by poor summer weather,” Brodie added.

“Through a range of actions the society rose to the challenge to deliver a good year end result.

“In the context of the current retail market, the additional cost pressure from the earlier than anticipated introduction of the national living wage will have a significant impact for the next few years, especially on our food business. The society will therefore take the tough decisions required, accelerating continuous improvement initiatives and continuing to innovate to drive the business forward.”

Bodie told The Grocer the NLW was one more factor it had to consider in its ongoing drive for better efficiency and improvement in a difficult retail environment.

“You just have to look at the Scottish Retail Consortium figures to see the challenges and we expect that they will continue to be the backdrop,” he said.