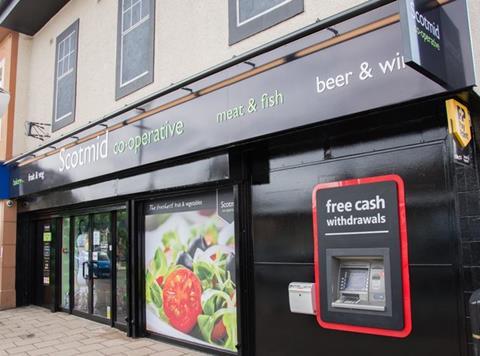 Scotmid Co-operative increased its trading profit and turnover in the first half of the year amid a “declining” Scottish market.

Half-year results show the independent co-operative made a trading profit of £1.97m, slightly above £1.96m in the same period last year. Operating profit fell from £1.75m to £1.59m after exceptional items of £0.39m while turnover was up £4m to £185m.

The society said the “sluggish” economy and unfavourable retail landscape would be “a significant ongoing challenge”. In particular it highlighted uncertainties caused by Brexit, price deflation, lukewarm consumer sentiment and costs of the national living wage (NLW).

“Against this background and that of a declining Scottish market our retail trading businesses delivered good performances,” commented chief executive John Brodie.

“The Scottish Retail Consortium reported a 1.6% average reduction in like-for-like sales in the six-month period. In this context our food convenience business performed well, with turnover growth driven by differentiation initiatives such as bakery and food to go helping to offset the market decline.”

Improvements in its 195 convenience stores, focusing chiefly on food to go, included reconfiguration to support the offer, a further rollout of concept bakeries, coffee machines in another 35 stores, the launch of Candy Crisp doughnuts in 10 stores, and growth of its ‘hot morning roll’ offer.

It also continued the improvement of its fresh range, installed self-checkout tills and completed its energy efficiency programme.

Furthermore, its ‘food vision’ work included a ‘make it simple’ programme for in-store tasks, and it was working with shopworkers’ union Usdaw to simplify terms and conditions within the NLW.

Other work in the first half up to 30 July included completion of major reinstatement at Scotmid’s Broxburn and Keswick stores after fire and flood damage, while six stores had completed Post Office ‘local’ format work.

Brodie said the co-op highlighted the challenge of the NLW in the context of an unfavourable Scottish retail market at its year-end.

“However, the last six months have seen the magnification of general market uncertainties both in the lead up to and after the result of the Brexit referendum and we anticipate that the uncertainty will continue until the shape of the UK’s terms of exit become clear,” he said.

“Consequently, we expect the second half of 2016 to be equally or more challenging with the full cost impact of the NLW. This will also continue into 2017 when we face further cost increases including the apprenticeship levy.

“The economy and in particular the unfavourable retail landscape will be a significant ongoing challenge for the society that we will continue to address with our continuous improvement philosophy, which has served us well for a number of years.”