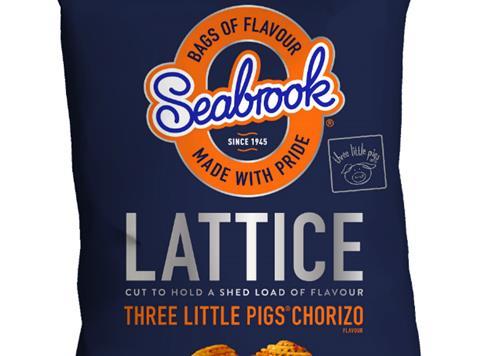 Profits at Seabrook Crisps continued to surge last year but revenues declined for the second year in a row as the competitive conditions in the snacking sector showed no signs of slackening.

The Yorkshire-headquartered brand said the year to 26 March 2017 had been “extremely challenging” as supermarkets rationalised shelf space in the crisps and snacks category as they continued to lose share to the discounters.

“Unsurprisingly, the past year remained extremely challenging,” CEO Jonathan Bye wrote in the accounts. “The major retailers continued to lose market share to the likes of Aldi and Lidl and pursued strategies to reduce ranges and space in most categories, including crisps, snacks, nuts and popcorn. Furthermore, key commodity prices, such as potatoes and oil, were relatively low during the year.

“The combined effect was to see category deflation and increased competition, which coupled with new pricing and promotional legislation, contributed to our revenue decline.”

He added: “Within this there were still some pleasing developments as we won our first own label contract and our first international business in locations including China, the Middle East and Europe.”

Seabrook has invested heavily in the business since a £35m LDC-backed MBO in July 2015, with a major capex programme implemented during the year to boost quality and increase capacity and flexibility, while reducing costs and waste.

Bye, who has turned the lossmaking business around in the past five years, told The Grocer that the predicted step change in revenue from the venture into private label manufacturing and international expansion had materialised over the first nine months of the current financial year.

“While revenues remain challenging as competition between retailers increases and category space is reduced in the UK, our strategies in increasing our business internationally, winning own label contracts, growing the Seabrook brand and focusing new product development into new categories, ensure we are well placed to grow the business in 2018 and beyond,” he said. “We will see the full effect next year too of our international business gains in China, the Middle East and Australasia and our own label wins.”

MD Ashley Hicks said competition in the UK had been “very intense” and the company increased investment in the brand to protect market share.

“Despite an ongoing competitive trading environment, Kettle continued to invest heavily in the category and in fact remained the leading hand-cooked crisp brand in the UK over this period, with retail sales ahead of the market and volume and value share growth,” Hicks added.

“We will continue to invest in our brands and are confident that we will grow further in 2018.”