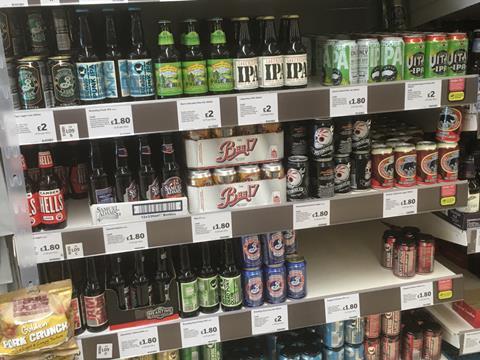 Sainsbury’s has taken an axe to a raft of large and multipack beer, cider and ale lines in what looks to be a major rationalisation of its booze offer.

The supermarket’s cull was not focused on one supplier, with over 70 SKUs from both major brewers and premium brands slashed, exclusive research by The Grocer has revealed [Brand View 52 w/e 13 May 2017].

However, it has completely ditched AB InBev-owned Stella Artois Cidre, after binning four lines from the brand.

Confirming the changes, a Sainsbury’s spokeswoman said: “We regularly review our ranges to make sure we offer customers great quality and value across all our products.”

It comes after Tesco, Asda and Morrisons all revamped their beer aisles with an extended craft offering.

Sainsbury’s announced this week it would be introducing 28 new craft beer and cider lines across 13 of its Northern Irish stores to capitalise on a “renaissance” of small-batch booze in the country.

However, it did not comment on whether there were plans to further ramp up its craft offering nationwide. It already offers a range of craft and speciality brews across the UK, featuring brands such as BrewDog, Drygate and Heineken-owned Lagunitas.