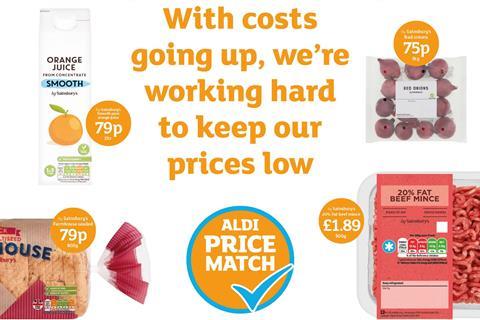 Sainsbury’s is ramping up grocery price competition by matching some of its highest volume lines to Aldi amid the cost of living crisis.

The supermarket has added its 20 highest volume lines to its Aldi Price Match campaign, including beef mince, brown onions, butter and orange juice.

“With costs going up, we’re working hard to keep our prices low. Our Sainsbury’s Quality, Aldi Price Match campaign has been really popular and this latest round of investment to strategically target the highest volume items will ensure customers get the best prices on the fresh items they buy day in, day out,” said Sainsbury’s food commercial director Rhian Bartlett.

“Customers are watching every penny and we are making it easier for them to buy what they need in our stores.”

Sainsbury’s is also investing in new in-store signage to highlight the lower prices and both of its value-focused campaigns, Aldi Price Match and Price Lock.

The previous ‘Great Prices’ posters will now be replaced with ‘Special Offers’, which Sainsbury’s said will make it easier for budgeting customers to spot promotions.

The retailer, which is currently enacting a two-year plan to “put food first” that includes a £500m investment in price, said the Aldi Price Match campaign was “driving secondary shopper basket growth” and had become a “core pillar of Sainsbury’s value offer”.

However, the 250 items in its campaign represent only 6% of its total range, while Tesco’s own Aldi price match campaign features about 650 items.

“This appears to be a relaunch with just a tweak of product additions and deletions, as happens every time the Sainsbury’s Aldi Price Match list is updated,” said IPLC partner Paul Stainton.

Some of the new items were already on previous APM lists but were removed at some point as Sainsbury’s moved to increase some of the prices, research by IPLC showed.

Sainsbury’s increased its 250g butter to £1.90 in early May whilst many rivals kept theirs at £1.75. That price has now been slashed to £1.75, allowing the product to re-enter the APM list.

Meanwhile, some items have been removed from the campaign following this latest review and have risen in price. Natural cottage cheese 300g was 69p as part of APM and is now retailing at £1.60 (Aldi’s equivalent is at 75p).

Sainsbury’s table salt 750g has almost doubled in price since end of May, from 27p to 55p, whilst Aldi’s equivalent product is currently 29p.

According figures from IGD today, food price rises in the UK could reach 15% this summer, the highest level in more than 20 years.