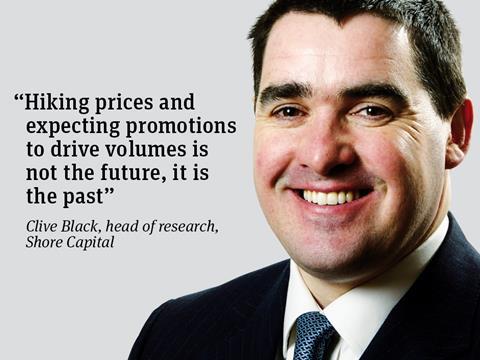 After the financial crisis Middle England faced a squeeze on living standards, which led shoppers to become more savvy: from quite clinically reducing food waste at home to shopping around to find a lower-priced basket.

Shopping around led to a surge in interest in the discounters and the high street bargain retailers, the former dominated by private label, the latter by proprietary brands. The need to save household pennies and the discounters’ entrepreneurship effectively unleashed the discount genie out of its teapot never to return.

But there was another factor in the rise of the discount channel that is less comfortable for proprietary brand manufacturers and supermarket bosses and shareholders in particular. That was of a British market where price rises were easy and sustained. Food inflation in the UK persisted much longer than it did in, say, France or Germany. Indeed, much of the British food chain became detached from the shopper’s needs. It became supplier dominated, with promotions a lazy route to deliver value, Shoppers sussed it out, and he superstores’ car crashed.

Since the referendum, history may be repeating itself, with cost recovery over shoppers’ needs. While each product and category will have its own pressure points, it may be advisable to recall how shoppers behave when inflation takes hold. A cold sweat emerges when double-digit percentage inflation is talked about openly by proprietary brand manufacturers (eg Birds Eye, Walkers, Marmite), almost brazenly one may add. If applied across the board such cost recovery would change British shopper behaviour big style!

There is a reasonable, nay necessary, argument for the shopper to take some of the currency-induced inflation undoubtedly coming down the line. Yet hiking prices and expecting promotions to drive volumes is not the future, it is the past. Reality will surely dictate that currency will also drive efficiency and new thinking, with the shopper taking some inflation, but the retailer under new and better management taking some too, as will the supplier. Over-inflating ultimately leads to trading down, a supply chain’s nightmare scenario.