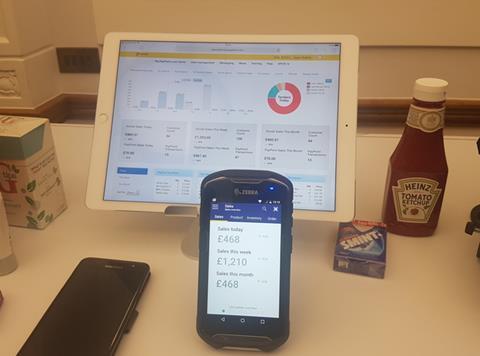 PayPoint is launching the latest version of its EPoS system alongside a new mobile app allowing retailers to run their stores on the go.

EPoS Pro is located on the PayPoint One platform, and uses cloud-based technology.

It accepts contactless and mobile payments, allows retailers to manage their news and stock, and includes links to symbol groups and wholesalers.

The PayPoint One app allows retailers to see real-time sales, change store prices and promotions, and scan and order stock at the cash and carry before returning to their stores.

PayPoint One with EPoS Pro costs £30 a week with no upfront hardware cost, while PayPoint One retailers can download the app for free.

“The way we’ve approached the development in terms of cloud technology really enables retailers to be free about thinking about how they operate their stores,” said PayPoint’s commercial director Lewis Alcraft.

“There’s live real-time views whether you’re looking at a device in-store, looking at an iPad at home or a phone at a cash and carry.”

PayPoint expects to roll out EPoS across 8,000 stores by the end of the financial year in March.

PayPoint chief executive Dominic Taylor told The Grocer that he was “looking at the complete universe of convenience retailers”, although he admitted this would not realistically include multiples.

This builds upon the success of PayPoint One, which was launched in 2016 across 6,700 UK stores. It can scan products, show in-store sales dashboard, and has an integrated card payment system.

“When we launched PayPoint One last year, we committed to creating a platform that meets retailers’ current and future needs and flexes as their businesses grow. EPoS Pro delivers on that commitment, particularly through the new mobile app which puts the retailer’s ‘store in their pocket’ and enables them to manage their store from anywhere,” added Taylor.

“We are incredibly pleased with the adoption of PayPoint One across our network so far and EPoS Pro expands its appeal further to retailers wanting full stock management, symbol links, news management and mobile connectivity.”