The 10 biggest spending advertisers in soft drinks have drawn in their belts over the past year, splashing out £21 million on traditional ad space, a decline of 22.1%.

Of course that doesn’t mean the giants aren’t advertising. The decline partly reflects the ramped up advertising the market saw in 2013 and the ongoing migration of activity to digital media.

Since the August launch of Coke Life, the stevia-sweetened variant has commanded nearly 9% of spend on the overall Coca-Cola brand, despite it currently accounting for around 1% of sales.

This is an indication of how much potential Coca-Cola Enterprises sees in Life. “We’ve made a commitment that by 2020, low or no calorie Cokes will account for 50% of sales,” says CCE general manager Leendert den Hollander.

Central to achieving this is Coke’s new masterbrand strategy, announced earlier this year, in which all four variants will be advertised together in a bid to encourage better understanding of the differences between them.

“We really want to help consumers make the choice rather than make the choice for them,” says den Hollander. “Fundamentally what we’re saying is that there’s a Coke for everyone and every occasion. If you don’t like red you can take one of the three other variants.”

Spreading that message and winning back share from Pepsi is going to take a lot of money from Coke, suggesting soft drinks ad spend could rise again over the next year.

The inspired Share a Coke campaign returned in 2014 with a bang. Four times as many names were plastered across bottles of pop than in 2013, said Coke, meaning 80% of drinkers would be able to find their name on a bottle.

Pepsi has the makings of arguably the best fantasy football team ever. For this cute bit of jumping on the World Cup bandwagon without actually paying Fifa any sponsorship money (Coke is the official partner of the tournament), Pepsi enlisted Lionel Messi, Sergio Agüero, David Luiz and others.

The ad hits the sweet spot in terms of cashing in on last summer’s football fever and achieving perhaps a more universal appeal than the skateboarding and BMX that dominates much of Pepsi’s online content, says Paul Graham, MD of Britvic, the brand’s UK bottler and distributor.

“We don’t discriminate from a brand perspective,” he says. “We generate interesting content that will resonate with a both male and female audience. I’d add that 25% of the crowds at Premier League games are female.”

Ooh er missus… this risqué little ad from the soft drinks market’s 10th biggest advertiser might be a drop in the ocean compared to the coverage Coke and Pepsi achieved with their big budgets and multichannel campaigns, but it’s significant nevertheless.

For two crucial reasons: it uses adult humour and a retro feel to attract a much older audience than most of its peers are targeting; and it reflects a trend that is gathering pace in soft drinks market – growth in premium drinks pitched at adults as an alternative to alcohol or as a mixer.

It’s a trend Britvic highlighted in its annual Soft Drinks Review, released today. “Particularly in the on-trade there is a trend into premiumisatuion,” says Britvic MD Paul Graham. “Adult soft drinks are performing well and so are mixers off the back of growth in the spirits segment. That’s putting value into the category.” 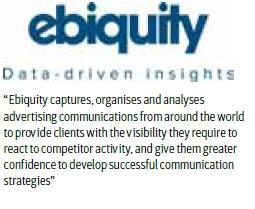