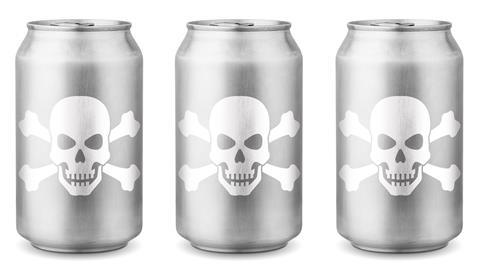 Are synthetic sweeteners like aspartame more dangerous than sugar?

As health concerns mount and the WHO pens new guidance, there are plenty of questions to answer

Tax affects behaviour. So said George Osborne when he announced the sugar levy in 2016. And he was right. If his aim was to cut the amount of sugar in soft drinks, the tax has been a roaring success. Manufacturers removed more than 30,000 tonnes of the stuff from their recipes from 2015 to 2018. Public Health England figures show a 28.8% drop in the sugar content of soft drinks sold over that period.

But the method behind that apparent success is not without controversy. In the place of sugar, manufacturers are ramping up use of artificial sweeteners such as aspartame, acesulfame K and sucralose. Consumers are lapping up these ingredients in their droves. Pepsi Max and Coke Zero Sugar, which both contain aspartame and ace K, grew by £77m (22.6%) and £54.1m (28.3%) last year respectively. That equates to an extra 105 million litres going through the supermarket tills.

How much artificial sweetener is in soft drinks?

Such fast-selling products should be cause for celebration. Yet manufacturers treat artificial sweeteners more like a dirty secret than a possible solution to the obesity crisis. Coca-Cola and Pepsi won’t divulge how much their drinks contain (neither would directly respond to requests for comment on this feature). Meanwhile, safety concerns are growing in the wake of studies linking these ingredients to cancer, disruption of gut bacteria, and ironically, obesity itself. Last year, a Cochrane review of the available research found there was “no evidence” to support any health benefits and “potential harms could not be excluded”. That review will form the basis of the World Health Organization’s upcoming guidance on non-sugar sweeteners, which is currently under consideration. That means there could soon be more substantial doubts over the use of these ingredients as a healthier alternative to sugar.

The WHO certainly has its work cut out in determining its stance. For this is an issue that polarises opinion. In July, a University of Sussex study concluded aspartame’s safety had not been “adequately proven” and went as far as calling for a Europe-wide suspension of its use. “I believe there are good grounds for deep concern about increasing consumption of artificial sweeteners,” says co-author Professor Erik Millstone.

The study was particularly critical of the European Food Safety Authority, which issued a reassurance the substance was safe in 2013. The University of Sussex team found the EFSA had discounted 73 studies that indicated aspartame could be harmful, but treated the vast majority of studies providing no evidence of harm as “unproblematically reliable”. “EFSA did a bad job,” says Millstone. “Aspartame has been shown to be carcinogenic, at least in laboratory animals. The most generous thing I can say about aspartame is that the safety case is incomplete and unconvincing.”

On the flipside, the authorities seem pretty convinced. None of the negative studies on sweeteners – which have also linked their use to dizziness, headaches, seizures, depression, Alzheimer’s, multiple sclerosis and more – have swayed the opinions of the more than 90 public health bodies around the world that have deemed aspartame, ace K, sucralose and others to be safe. They consider the scientific studies that back the safety of sweeteners to be more robust.

What does the industry think of aspartame?

“A study conducted on behalf of the UK Food Standards Agency in 2015 found no negative health links related to the consumption of aspartame,” says Gavin Partington, director general of the British Soft Drinks Association.

He points to just how widespread that view is. “According to all leading health authorities in the world, as well as Cancer Research UK and Diabetes UK, low- and no-calorie sweeteners are safe,” Partington says. “In March 2017, the UK government and Public Health England publicly endorsed low- and no-calorie sweeteners as a safe alternative to reduce sugar in food and drink and help people manage their weight.”

That final point is crucial. Because the move towards artificial sweeteners has been all about reducing calorie intake and managing the obesity crisis. Considering they are hundreds of times sweeter than sugar and virtually calorie-free, artificial sweeteners should be able to deliver on that front. It’s a factor that Britvic, Pepsi’s UK manufacturing and bottling partner, was keen to make in its response to the controversy around low-calorie sweeteners. “They have an important role to play in providing an alternative for those looking to reduce their calorie intake or for those who simply wish to limit sugar consumption,” says a spokeswoman.

Even here, though, there is controversy. Millstone says the concept of sweeteners helping people to lose weight is massively contested. “Some studies suggest they may be counterproductive because they function as appetite stimulants,” he says.

A 2016 University of Sydney report, for example, concluded that “after chronic exposure to a diet that contained the artificial sweetener sucralose, we saw that animals began eating a lot more. Through systematic investigation of this effect, we found that inside the brain’s reward centres, sweet sensation is integrated with energy content. When sweetness versus energy is out of balance for a period of time, the brain recalibrates and increases total calories consumed.”

Still, the consensus largely remains that sweeteners are the lesser of two evils. Because for all the debate around their purported benefits, the science is conclusive on the link between sugar and obesity. Hence the sugar levy.

“Experts predict that within a generation over half of all boys, and 70% of girls, could be overweight or obese. Obesity drives disease. It increases the risk of cancer, diabetes and heart disease – and it costs our economy £27bn a year; that’s more than half the entire NHS paybill. And here’s another truth we all know: One of the biggest contributors to childhood obesity is sugary drinks.”

There is another, more practical argument for the continued use of sweeteners, too: they are less expensive than sugar. The cheapest of the most widely used artificial sweeteners is ace K, followed by aspartame and sucralose (which is in fact made from sugar) These ingredients were respectively trading for $7.17, $13.91 and $50.40 a kilo at the end of last year, according to Mintec.

True, granulated white sugar was trading for just $0.55. So kilo for kilo, sugar is by far the cheapest sweetening option. However, ace K and aspartame are said to be at least 200 times sweeter than sugar, and sucralose is at least 400 times sweeter, so manufacturers can make significant savings by swapping sugar for artificial sweeteners.

“Depending on the recipe and how the reduction in sugar is dealt with, savings can be generated,” confirms Jan-Peter Scheurwater, global strategy and business development director at agricultural giant Cargill, which produces a range of naturally derived sweeteners such as stevia and erythritol. “We cannot speak for artificial sweeteners, but for stevia, we work with our customers to be competitive in terms of cost-in-use.”

For consumers too, drinks that rely on sweeteners rather than sugar work out cheaper. Since the sugar levy came into force, manufacturers have been passing on the 24p tax for every litre of pop containing 8g/100ml or more of sugar, and 18p for every litre containing between five and 7.9g/100ml. Coke Classic now sells for almost 40p a litre more than Diet Coke and Coke Zero Sugar [Nielsen 52 w/e 7 September 2019].

For now, that combination of lower prices and fewer calories is proving a hit with shoppers. Indeed, the UK is one of Europe’s biggest markets for diet soft drinks. “According to Global Data figures, 65.3% of soft drink sales in the UK in 2018 were of low- and no-calorie products,” says the BSDA’s Partington. “This was up from 61% five years previously. In comparison, low- and no-calorie soft drinks only account for up to 30% of sales in many European markets [Unesda].”

That lower figure in Europe points to another problem with artificial sweeteners, though. Because even if the authorities deem them safe, consumers on the Continent are fairly wary. In France and Germany more than half of consumers consider the absence of ‘artificial sweeteners’ important in their purchase decisions, according to HealthFocus research. Forty-seven per cent of consumers in Russia agree. At the moment, that figure stands at 44% in the UK.

The UK figure may seem low by comparison, but it’s important to put these attitudes into context. Globally, 31% of consumers believe aspartame is harmful to their health, versus 26% who believe the same of high-fructose corn syrup [Global Data]. That’s despite high-fructose corn syrup (a natural sweetener used in many full-sugar drinks) being stigmatised (even more than sugar) for its links to obesity, type two diabetes and heart disease.

And the UK audience may become more averse to artificial sweeteners yet. Consumers are increasingly moving away from products perceived as processed towards those marketed as more ‘natural’. The likes of aspartame and ace K certainly can’t claim any natural credentials. These ingredients are made in laboratories through processes that require expertise in chemistry – many of which would sound offputting to your average punter.

Take aspartame. The process for making it is not for the squeamish. It is made by treating waste from genetically modified e.coli bacteria with alcohol and methanol, according to the European patent for the sweetener.

It’s worth noting that genetic processes like this are in wide use today. For example, the insulin used by most type one diabetics today is produced in a similar way to aspartame. But in the age of clean eating and all things natural, consumers may increasingly find this a disconcerting idea.

In which case, the future of artificial sweeteners won’t be down to the taxman or even the public health authorities – but the everyday consumer.