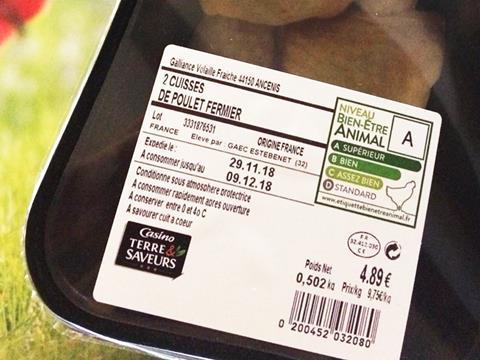 The labelling, rolling out now, grades meat based on method of production and animal welfare levels across four categories

French supermarket giant Casino has teamed up with Compassion in World Farming to launch the country’s first method of production labelling scheme.

The scheme, rolling out now, grades meat based on method of production and animal welfare levels across four categories: A (superior); B (good); C (pretty good); and D (standard).

Developed by CIWF and Casino over 18 months, the labelling would give shoppers access to “clear information about its welfare attributes”, said Casino general director Tina Schuler.

It would initially be restricted to fresh chicken products under Casino’s Terre & Saveurs brand. However, it also had the potential to be rolled out across other poultry products sold by the chain and other species, across Casino’s wider European businesses, and even among other retailers, said a spokeswoman for CIWF.

The criteria behind the label is based on 230 animal welfare indicators verified by third-party auditing, which covers all phases of an animal’s life; from birth, to how animals were reared, transported and slaughtered.

“It will undoubtedly make it easier for consumers to make higher-welfare choices when they are out shopping and support those farmers that are committed to higher-welfare production.”

The move by Casino follows a similar initiative launched by Lidl in Germany during the spring.

The Haltungskompass (‘method of production compass’) was introduced on fresh beef, pork, chicken and turkey lines in April.

It gives each product a score out of four based on how it was produced, allowing shoppers to see, at a glance, how welfare and production standards compare across different products. Lidl UK said the German launch had been “very well received” by consumers and the discounter was now considering bringing the system to the UK.

It follows growing calls for mandatory method of production labelling in the UK.

The Labelling Matters coalition, which counts RSPCA Assured, the Soil Association and Compassion in World Farming among its members, launched a campaign in March calling for clearer labelling.

The government’s agriculture bill, which is making its way through parliament, notes the government may introduce future regulations covering “the type of farming and production method”, in addition to the presentation, labelling and packaging of products.