Christmas turkey rush could lead to shortages of British birds 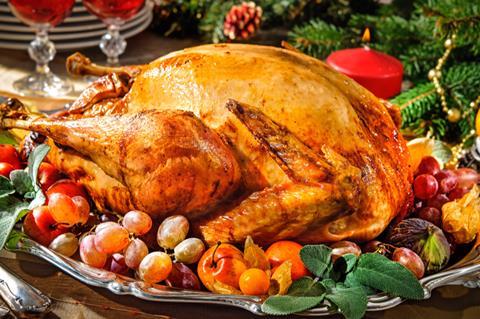 Shortages of British turkey meat have been predicted after sales of joints and smaller birds have rocketed in the face of Covid Christmas preparations.

On Tuesday (17 November) Asda said sales of frozen turkey crowns, which typically serve three to four people, had increased by 230% year-on-year, so far.

Meanwhile, Kelly Turkeys MD Paul Kelly said he had sold out of smaller turkeys at the end of October and anticipated he would be completely sold out “in the next week or two”. He said his online orders were currently where they would usually be at the beginning of December – up 130% compared to 2019.

A combination of Covid-19 restrictions limiting family gatherings and a massive fall in foreign travel – five million Brits travelled abroad over the 2019 festive period – was expected to lead to more in-home occasions.

But according to Kelly, this surge in demand could now lead to a dearth of British-reared turkey meat on the market.

“I think there will be a shortage of turkey, I can’t see how there’s going to be enough to go around,” he said.

“Some of the bigger processors couldn’t take as many [birds] because they were concerned they couldn’t get the labour because of Covid-19. Supermarkets cut back a bit because they thought there was going to be wastage. And of course, everyone’s at home for Christmas this year.

“I’m sure there will be turkey about but it will be imports of frozen turkey from Poland.”

Gressingham looks to cash in on smaller Christmas gatherings with geese

Polish turkey meat is usually sold on the wholesale and foodservice markets. Commodity prices for turkey meat were said by Kelly to be “on the floor” due to the closure of most foodservice outlets during the second UK lockdown, while he said retail prices were 3-4% higher compared to 2019.

The news comes as the government granted an exemption to seasonal workers from having to fully quarantine when entering England after warnings the restrictions would hamper production of festive food staples.

As of 4am on Tuesday (17 November), poultry labourers would be able to work throughout their 14-day Covid-19 quarantine period but would still be required to self-isolate from the general public. The exemption runs until 31 December, by which time all workers would be required to leave, Defra said.

The move came just in time for processors whom The Grocer understands are set to ramp up production from next week onwards.

It comes close to a month after the British Poultry Council (BPC) called for the exemption. At the time, BPC warned the Christmas turkey supply could “collapse” unless the government intervened to allow skilled labour into the country without restrictions.

In a statement, the BPC welcomed the move. CEO Richard Griffiths said: “The seasonal turkey industry looks to bring in around 1,000 workers and we are hopeful that this exemption will be helpful.

“If the exemption helps us deliver a fantastic Christmas and helps our smaller seasonal producers out, then it can only be a good thing.”

According to Defra, each year around 5,500 seasonal workers arrive on English farms to work during the festive period.