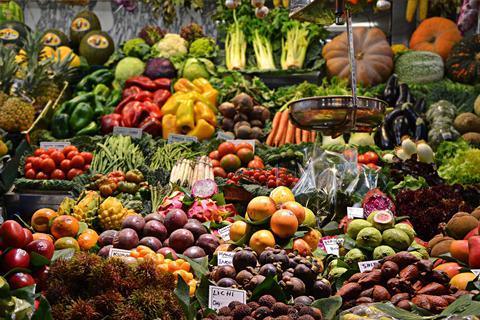 Global coronavirus lockdowns and scarce air freight could soon lead to shortages of some fruit & vegetable lines, suppliers have warned.

Foreign suppliers are striving to keep up with surging demand and have so far largely maintained consistent supply.

However, this is becoming increasingly difficult as producers lose staff to lockdowns, childcare concerns and illness.

On Wednesday, India announced a “complete” lockdown until at least 14 April. The country is the UK’s main supplier of vegetables such as baby sweetcorn, chillies and okra.

“We’re trying to find alternative sourcing markets for those products, but they are relatively few and far between.”

Indian fruit exports are similarly affected. “We’ve got grape containers that are cancelled…they’re not moving anything,” said Paul Rowe, sales and procurement executive at Poupart Imports.

Availability of choice is expected to reduce further as supplies become increasingly hard to source. “Some of the items that would have been more normal to be on shelves simply won’t be there because they’ll be harder to access,” said Swain.

It is leaving the industry rife with uncertainty. “Everything changes by the minute and not the hour or the day,” said Rowe. “We don’t know who we’re going to supply, whether they’re going to buy it, whether they can pay for it.”

The lack of air freight is also troubling importers. The grounding of passenger aircraft has placed an immense strain on specialised cargo carriers, with the industry now unable to meet demand. Prices have soared with some carriers increasing rates 10-fold.

It is putting a heavy strain on the price of goods. “If all of a sudden the underlying price needs to be significantly higher, then you start to question whether that’s sustainable for a customer or a retailer to take,” said Swain. “I think some tough decisions will happen certainly.”

The effects are also rippling out beyond air freight into other modes of transport.

UK border officials, for example, require exporters to send a shipping container’s original paperwork by air ahead of time in order for it to be processed upon arrival at British ports.

But with the effective cancellation of air mail, this can no longer be done. It is causing many loads to be delayed upon arrival in the UK.

“There have been occasions where consignments have been held up waiting for paperwork,” said Nigel Jenney, CEO at the Fresh Produce Consortium.

Jenney is calling on the government to accept an online version of the same form to ensure the food can pass smoothly into the UK.

“We are challenging government to reflect on what are now necessary and appropriate official inspections and avoid any unnecessary delays.”