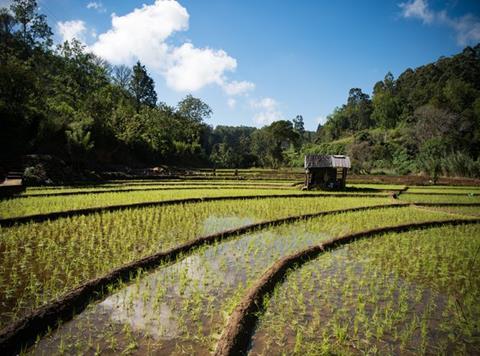 By encouraging rice famers to employ climate-smart practices, we could reduce methane emissions by up to 70%

There’s a group of rice farmers in Thailand who are celebrating one of their best harvests ever. The rice is tall, dense and strong.

This isn’t because the farmers are using more fertiliser or better seeds. Or that the weather has been perfect. Rather it’s down to some fairly simple changes in agronomy practices learned from Olam and development agency GIZ under the Sustainable Rice Platform (SRP). While I am proud to hear the farmers recount what this harvest means for them, I’m frustrated that for the sake of some knowledge and a few changes to their methods, they could have had this kind of yield years ago.

As global head of environment at Olam with over 45 commodities, I’m also convinced that the SRP methods are the closest thing we have to a silver bullet for lowering global GHG emissions in agriculture. Why? Because with 500 million metric tonnes produced a year, rice is one of the leading manmade contributors of methane, which is 34 times more potent than carbon dioxide over a 100-year period. Rice production emits the same level of CO2 as Germany. Vegetation, such as rice straw, rots in water-soaked paddy fields. By encouraging farmers to remove straw after harvest and employ other climate-smart practices, we can reduce methane emissions by up to 70%.

So as we head towards the Conference of the Parties climate talks and Christmas, can the retail sector grant me a wish and bring rice in from the cold?

Rice has long been overlooked in the sustainability stakes and it’s not hard to see why. While many rice farmers are poor, they are not as poor as in some other crops; you can’t see the effects of methane as you can with, say, deforestation; and, as a staple, it doesn’t have the same consumer profile as more indulgent ingredients like cocoa. So despite a major impact on global warming, rice has largely remained an academic interest.

Opinion: Food and drink can help tackle climate change, but it must act now

Also, as only about 30% of rice consumed in the UK is imported from smallholders in Asia, you might say ownership for solutions lies within those governments and agri companies like Olam. And indeed it does - with the Thai Rice Department, GIZ and others, Olam is aiming to reach 150,000 farmers by 2023 in Asia and Africa. But far greater scale is required.

As a procurement standard we believe SRP is a relatively simple ‘plug and play’ approach. Through implementation, UK retailers have the power to catalyse significant change, and bring in other stakeholders like banks and insurers to advance and incentivise support for these farmers. In turn, this will meet growing demand for more sustainable products and play a major role in keeping us within the very necessary 1.5°C threshold.

Commodity supply chains are beset with challenges. Rice is no different. But there is a solution with SRP. If we can bring rice into the sustainability fold we will be a major step closer to re-imagining agriculture for the better.

Chris Brown is global head of environment at Olam International