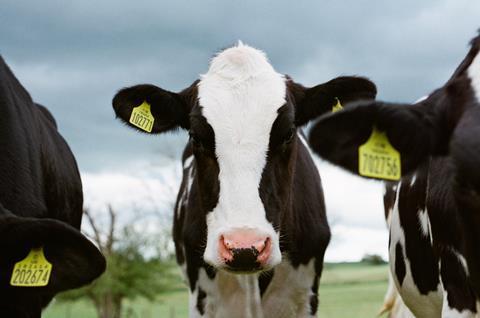 M&S said the move would help it avoid almost 4,000 tonnes of soya being used each year

M&S has eradicated the use of soya feed from the production of all its milk as part of a push to tackle deforestation.

The retailer will have eliminated soya from its milk supply chain from tomorrow (1 October) after working with the 44 British dairy farmers who produce its RSPCA Assured milk to replace the feed with alternatives such as rapeseed oil and sugar beet – helping it avoid almost 4,000 tonnes of soya being used each year.

The move marked an important milestone as part of M&S’s goal to ensure zero deforestation from the production of its products, it said.

M&S has also pledged to ensure 100% of the soya used for its products is sourced through approved or recognised sustainable soya schemes, including the Round Table for Responsible Soy and Proterra, by the end of 2020.

The retailer said it was also continuing to explore “solutions for more sustainable animal feed across our wider supply chain”.

“Soya is widely used in animal feed across the industry because it’s fast-growing and protein-rich, but we’re all aware of the devastating impact its use is having on Brazilian forests,” said M&S Food’s director of technology Paul Willgoss.

“Our absolute priority as a business is to eliminate deforestation from the production of our products and to get there, we’re looking at both reducing our reliance on soya and finding more responsible ways of sourcing it,” he added.

“We’re incredibly proud of the team’s hard work to move 100% of the animal feed in our milk supply chain to high-performing soya alternatives. This marks a critical step in our journey as we continue working to play our part in ending deforestation.”

The move was welcomed by the WWF’s head of food commodities Emma Keller.

“It matters that M&S is stepping up its commitment, because if we transform the way we produce food and change what we choose to eat we can turn things around for the health of our planet. We want to see food companies make the soy they use more sustainable but also to diversify and reduce dependence on single commodities.”