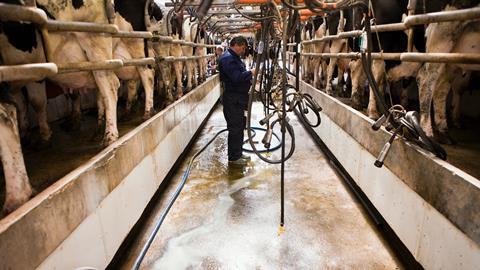 Farming unions are calling for reforms to milk pricing. So what changes are they proposing? And what does it mean for processors?

How farmers are paid for their milk, and whether they are treated fairly, has become one of the defining issues of the dairy sector over the past decade.

The government and industry agreed on the current Voluntary Code of Practice in the autumn of 2012, after a spate of short-notice farmgate price cuts by processors led to widespread farmer protests.

The code set out that either a clear price, or a clear “discretionary” pricing mechanism (such as a formula) should be negotiated and agreed upon in contracts between producer and processor. All milk buyers apart from co-ops would also have to give producers at least 30 days written notice of any downward change to the price.

By early 2013, an estimated 85% of British milk was bound by the principles of the code. But after a series of crises and farmer protests due to low milk prices over the next five years, then-farming minister George Eustice admitted in autumn 2018 that the voluntary code “had not worked”.

Since then, the government has been looking at new regulations to help dairy farmers in price negotiations. And in June, following a series of damaging price cuts by processors exposed to the slump in foodservice sales at the start of lockdown, it launched a consultation on the issue.

So with the deadline for submissions now passed, what is the farming sector calling for, and what’s the response of the processors who pay them?

Speaking in June, current farming minister Victoria Prentis made it clear that she wanted to “crack down on any unfair practices within the UK dairy industry”.

But it may prove difficult for farmers and processors to find common ground. After all, the main farming unions and major processors had already come to blows when Defra first proposed reform two years ago.

Processor trade body Dairy UK warned in October 2018 that any move to introduce the regulation of contracts would have a “detrimental impact” on the long-term health of a sector that had just seen the collapse of Tomlinsons Dairies and grave warnings over profitability from both Müller and Arla.

And despite the conciliatory tone of their consultation submissions earlier this month, it’s clear the NFU and Dairy UK are still miles apart.

The NFU says the current code of practice has ultimately proven “ineffective in improving fairness and transparency due to its voluntary nature”. Evidence from the NFU’s Legal Assistance Scheme also points to “a concerning trend of increased legal support required over the past five years” as farmers entered contractual disputes with buyers.

One of the key tenets of the voluntary code is the discretionary pricing model – which allowed processors to change the price they paid for milk in response to market fluctuations.

It’s a system the NFU says is “unfair” and should be eliminated. Its response to the consultation says “dairy contracts should set out how the farmer will be paid based on objective and verifiable criteria”.

Pricing mechanisms “should only be capable of variation by agreement between both parties”, it adds. “The removal of discretionary pricing would enable risk to be shared, and for farmers to have more certainty over how their milk price is calculated.”

Ultimately, “misuses of power” by some processors “undermined the trust in the system of buyers’ discretion”, the NFU claims, adding the system is “outdated and incongruent with the global marketplace”.

The NFU’s other proposals for reform include the introduction of non-exclusive supply contracts – meaning farmers can switch to another buyer far easier in the event of a dispute.

Better support in creating producer organisations would also empower farmers, the NFU adds. Meanwhile, it has also resurrected calls for an independent, GCA-type body to oversee any new regulations and to resolve disputes.

Contract reform, at a glance

What the NFU is calling for:

Dairy UK, for its part, agrees that some reform is required, and supports making supply contracts statutory in its own submission. It also calls for new rules to “comprehensively address issues of best practice”, such as the use of termination clauses and force majeure.

But while Dairy UK is now generally “supportive” of moves to regulate contracts and ensure a level playing field, it says it is “wholly opposed to any moves which would end or impinge upon purchaser discretion”.

Removing price discretion would “simply lead to more instability, risk, and insecurity for farmers as well as processors”, it warns. “It also risks causing a number of serious issues in terms of administration and investment for PLCs and farmer co-ops, the latter of which could see the core ethos of their organisations undermined.”

Müller, which left Dairy UK earlier this year, adds that any future contract regulations should be market-orientated, fair and consistent, with “the latitude to create innovative solutions where it benefits the whole supply chain”.

And if mandatory contracts are to be introduced “they must be applied consistently across our industry with no exceptions”, it urges, in a thinly veiled dig at the fact co-ops were previously exempt from some elements of the voluntary code – such as the need to give farmers 30 days’ notice of any downward price changes.

Many industry commentators have also pointed to the fact the NFU has not proposed a viable alternative to discretionary pricing, with one senior source claiming the union “responded with emotion”.

Any alternative price mechanism that tracks a market, as it would need to, they claim, “is likely to create greater swings in milk price from high to low, and farmers would see more frequent price variations”.

“For far too long, dairy farmers have borne the brunt of contracts that are weighted heavily in favour of the milk buyer”

The NFU, however, insists the current “archaic” system needs tearing up. “We have spoken to a number of co-ops to understand their concerns and ensure regulation does not create unintended consequences,” says NFU dairy board chairman Michael Oakes.

“There are many private and plc dairy companies who operate well in partnership with their dairy farmers. We feel very strongly that regulation should only help improve the situation of those who share our principles, not adversely impact them.”

But he stresses “for far too long, dairy farmers have borne the brunt of contracts that are weighted heavily in favour of the milk buyer who can change contract terms and pricing mechanisms, and even introduce retrospective penalties and price cuts without negotiation”.

Defra has pledged to publish its own response to the consultation and outline its future plans within 12 weeks. The direction ministers decide to follow could well shift the sector’s future balance of power.