A successful deli owner introduced me to the concept of the ‘supermarket spy’, an emissary sent out by a supermarket head office to report on what flagship independent grocers sell. Their job is to identify products that chains could list as a way to acquire some artisan credentials. “You can always spot them in the shop. They look uncomfortable, and their eyes are darting everywhere. They’re pinching our food ideas, and we know that supermarkets undercut us on price initially just to put us out of business. There’s nothing we can do to stop this.” 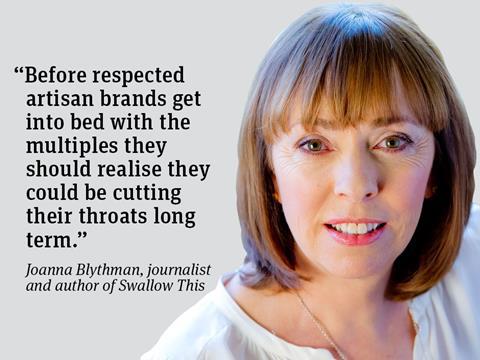 One independent cheesemonger also told me that while other chains simply didn’t have credibly equivalent deli offers to compete with her range, Waitrose, she feared, could close her down. “Their range isn’t as exciting or as specialist as ours, but they stock just enough to stop people making the trip to our shop.”

So independents won’t like the news that Waitrose has signed up several British artisan suppliers to bolster its in-store deli counters, in 16 stores initially, to inject a little Borough Market-type provenance into its operation. Trealy Farm Charcuterie and Ginger Pig sausage rolls are among the 17 new lines.

But before artisan brands get into bed with the mults they should realise that they could be cutting their throats long term. Prominent independent delis have warned they will delist producers that sell to supermarkets.

And artisan brands may discover that supermarkets make fickle bedfellows. There’s the one-night stand: a trial, quite rapid delisting, followed soon after by the supermarket’s own-brand copycat version. Or there’s death by degrees. Year one, the relationship is hunky dory. Year two, the supermarket has turned into a domineering partner demanding extended credit, supplier-funded promotions, and lower prices. Year three? An acrimonious break-up.

Independent shopkeepers rightly remain loyal to stalwart artisan companies that won’t take the supermarket shilling. They have a richer choice every day of all the exciting, new-wave, startup artisan products. Meanwhile, any small-scale brand that cosies up to multiples loses its specialness, and there may be no going back.