Many commentators called it the first truly online Christmas for the grocery sector, while others branded it the year of the discounters. And there was plenty of evidence in the various retailer results announcements of the past few weeks to back up both of these theories.

But as well as these key trends, new research by The Grocer/Him! shows that shoppers were also at their most promiscuous over the festive period. In our Shop Waves survey of 1,000 shoppers, carried out in early January, more people had visited almost every supermarket, discounter and c-store over the previous month.

However while on the face of it, everyone appears to have benefited from this trend, it is also clear to see who the big winners were over the festive period. Aldi, M&S, Iceland and Poundland all attracted significantly more shoppers. In our January poll, the number of people who said they had recently visited one of these stores had increased by six percentage points each compared with our previous poll in October. 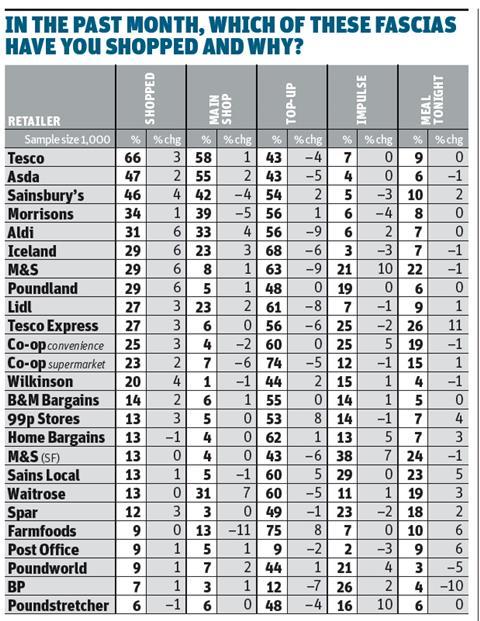 Sainsbury’s, which was declared the winner over Christmas according to the latest six-week Kantar figures, also saw the amount of people in our survey who visited its main stores over the period increase by four percentage points.

Meanwhile, the number of people claiming to have visited Waitrose remained the same - though it appears more people switched the big Christmas shop to its stores. The number of people who went to Waitrose for the main shop was up seven percentage points.

Him! research and insights manager Blake Gladman said the figures demonstrated the rising importance among shoppers for both perceived value and quality. “The clear wins for Aldi, Poundland and M&S show the relative extremes at which the balancing act between quality and value pays off. Sainsbury’s, on the other hand, managed to deliver through both their range and clever messaging to tick both boxes for shoppers, so no surprise to see them doing so well,” he said.

“A congested marketplace is only going to grow, with many retailers branching out into multiple formats, not just increasing store numbers - think Aldi going into convenience, c-stores opening up discounters, the rise of the supermarket convenience store… It becomes increasingly important to separate yourself from the competition and be famous for something - quality or value is a good place to start.”

The research also shows how shopper perception of value is changing. Last January, when we asked shoppers which retailer offered the best value for money, Asda was the winner by some distance. The Walmart-owned grocer has been named The Grocer’s lowest priced supermarket for the last 15 years running and received 27% of the vote compared to Tesco with 18% and Aldi on 14%.

Tesco fared better in the small shop space, however, coming out top in value for money for convenience stores, with Tesco Express getting 20% of the vote, ahead of The Co-operative Group with 12% and Sainsbury’s Local on just 7%.