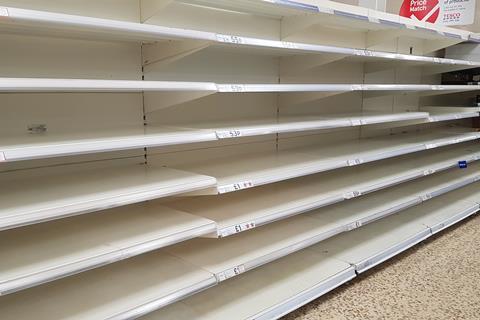 Panic buying has left supermarkets across the country with empty shelves

Supermarkets will continue to benefit from coronavirus stockpiling, even as the country moves to lockdown, according to a senior retail analyst.

Amid scenes of empty shelves across the UK and panic-buying chaos, retailers are reporting record daily volume sales.

Bruno Monteyne, a senior analyst at Bernstein, who was one of the first retail experts to predict the extent of stockpiling, said he believed supermarkets would continue to see spikes in demand. This would remain the case even if the government moved to tighter lockdown measures, he added.

Although bulk buying would tail off as shoppers filled their cupboards, tighter measures, such as the restaurant closures announced on Friday, would lead to further spikes, he said.

“The food retail sector is one of the very few sectors to benefit in these testing and uncertain times,” said Monteyne, who described shoppers as “hamsters stuffing their cheeks with as much food as possible”.

“One only needs to go to their local supermarket to see that things have changed in the past month. Empty shelves have become a common sight and governments are imposing buying limits.”

But this was “just the start of phase one of the pandemic” he said.

“Whilst this stockpiling behaviour will tail off at some point, we see it being reinvigorated by increased lockdowns and school and restaurant closures,” said Monteyne.

“Assuming a V-shaped recovery, some de-stocking of pantries later in the year will be a small drag to growth.”

The closure of restaurants and bars would lead to a £15bn shift of sales from out-of-home to supermarkets, he said.

But he added that the industry was also prepared to cope with phase two of the pandemic, which he believed could include further rationing of ranges, and the army being called in to stop rioting and looting, to ensure the nation gets fed.

“Despite the empty shelves, there is plenty of food,” he said.