Shares in the listed supermarkets slumped again this week after Kantar Worldpanel figures pointed to further loss of market share and Tesco reported another quarter of weak sales.

Although all eyes were on Tesco following its worst like-for-like sales results in over a decade, the biggest faller of the week was Sainsbury’s.

Sainsbury’s sales are holding up the best of the listed players, but this week’s Kantar data suggested it was starting to lose market share.

The supermarket is due to report its first-quarter sales on Wednesday next week and in an investor note, Bernstein updated its like-for-like sales forecast from 0.1% to -0.8%.

Tesco reported a 4% drop in UK like-for-like sales, which was widely reported as a quarter to forget, although it was not quite as bad as Kantar data from the previous day had suggested.

HSBC analyst Dave McCarthy estimated this week that Tesco was getting more than a million fewer customer visits a week, while Morrisons was seeing 800,000 fewer visits.

He warned things could get worse, pointing to Kwik Save - once a FTSE 100 company with a 10% market share.

“The market is in danger of getting desensitised to bad figures from the quoted three, but that would be a mistake,” he said. “No retailer has a right to exist and will only endure if it retains a compelling offer.”

What is bad news for the supermarkets is good news for the discounters. Encouraged by the growing market share of Aldi and Lidl and an upgrade from brokers at JP Morgan, investors piled into newly listed Poundland. On Tuesday, Poundland shares climbed 3.2% to 343p.

Upgrading the stock from neutral to buy, JP Morgan said Poundland’s shares had been hit in recent weeks by concerns about the impact of Tesco’s launch of pound aisles in larger stores, but it said it believed the impact would be limited.

“We regard Poundland as a well-managed retailer with a strong market position and significant prospects for future growth,” it said. 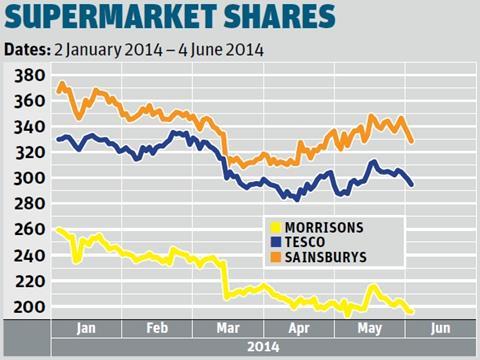