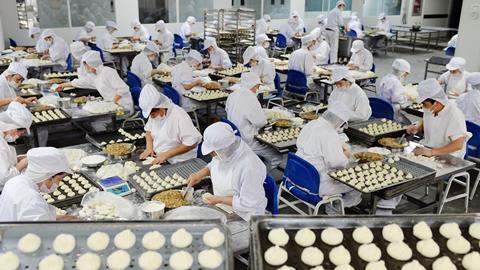 As the impact of the coronavirus crisis sweeps through every aspect of the food and drink industry, The Grocer looks at how suppliers are responding to their biggest challenge since World War II.

The looming prospect of mass absenteeism is among companies’ greatest fears.

“Our worry is personnel,” says Warburtons chairman Jonathan Warburton. “We make 19,000 deliveries a day. If it gets a grip of the workforce, we have a problem.

“And we can’t provide accommodation.”

Warburtons’ general manager in Bristol is one of those in self isolation.

“Within two days his replacement was also in isolation,” says Jonathan Warburton.

“If Covid-19 gets a grip of the workforce, we have a problem”

Multiply this and it’s easy to see why the FDF sees staff absenteeism of driver and factory workers “through sickness, self-isolation or caring responsibilities” as its biggest threat.

Some companies have already had painful forewarnings of the impact from their bases in Europe.

Household goods own label giant McBride’s plant in Bergamo, epicentre of the Italian COVID-19 crisis, was temporarily forced to close down. It has now re-opened with a skeleton crew.

Its not just stores recruiting to tackle the impact of the outbreak. Faced with the dangerous combination of huge spike in orders and the threat of staff shortages, food companies have launched massive efforts to hire more workers.

Kellogg’s is hiring to ramp up production at its Manchester factory.

Pork processor Karroo Food Limited has launched an appeal to find more than 400 new staff on permanent and temporary contracts to meet the increased demand from supermarkets.

“The demand for in home food has risen sharply” says Steve Ellis, CEO at Karro.

We would encourage people looking for permanent or temporary employment to get in touch and come and join us in feeding the nation.”

They have organised flights from Bulgaria, bringing more than 500 migrant workers in the past few days, although one source says that as many as 15,000 workers across the country were already needed for May alone.

Suppliers are also having to make extraordinary shortcuts to find staff, including interviewing remotely.

Responding to a surge in demand while observing social distancing is also proving a major headache.

Many companies have split key workers split into separate shifts to keep them apart, in the hope of staggering absenteeism. Companies have brought in split shifts with no physical handovers and spread key technical roles evenly.

Hilton Food Group says it has established several protocols to protect its people and to minimise contact, and managed to keep “all of our facilities fully operational.”

“We’re taking as many precautions as we can,” says HR director at G’s, Beverly Dixon.

“The senior team are still in the office but social distancing.

“We’re splitting up the office, so people are four metres away from each other.

“We work an ABC-system, so you limit the same roles in the office and have different sets the next day.”

Some companies have brought in compulsory temperature testing before they allow workers into factories.

One industry source says there is also some evidence emerging to suggest the use of face masks, despite official PHE guidance saying the measure was not needed.

“It is the socialising element that could prove to be the toughest ” he says.

“However, camaraderie of colleagues is high, and we are pulling together,” he adds. “We are all catching up online using Zoom [video conferencing] for an after-work drink, for example.”

With the BRC revealing £1bn of extra food was in households’ cupboards by last weekend, many suppliers have been seeing demand surges of more than 50%, and some as much as75%.

“Suppliers are ramping up production but can only do so for so long.” says a senior food industry source. “While levels of over-production cannot be sustained indefinitely, at the moment the system is coping pretty well.”

“We’ve been flat out for a couple of weeks,” says Jonathan Warburton.

“Flour tonnage usage is up 30%. If we had two bakeries idle and we were able to switch them back on we would.”

AG Barr said storage restrictions were a major issue for most companies.

“In common with most food and drink manufacturers, we are reliant on a number of raw materials and packaging types which it is not possible to store on site for more than a few days.”

As a result, some suppliers are seeing stocks start to run low as they face a boom in orders.

“We normally have seven to eight weeks of stock level, but we are down to three weeks, which, without wanting to worry anybody, is quite low,” says one source.

“However, we are forecasting that this will not last too long as the demand cannot stay at this level. There is more than £1bn of extra food in people’s homes so demand has to slow at some point and allow stock levels to return to something approaching normal.

“Across all categories, the food is there. We are not going to run out of food. There is food security, but it is just in the wrong place at the moment and we need to figure out how to get it to where it needs to be.”

An FDF survey shows 80% of companies have concerns about coping with the demand. A third fear they will be unable to meet an uplift in orders from supermarkets of between 11% and 25%.

Yet Filippo Berio UK managing director Walter Zanre says with the help of logistics partners, companies are managing to cope with the spike in orders.

“Our logistics partner, Lenhams, have been nothing short of heroic,” says Zanre.

“Our UK delivery service, despite the massive increase in volumes, has continued virtually unaffected. We have just had to add a day to our minimum lead time.

But he adds: “Lenhams are beginning to feel the impact of staff having to self-isolate due to flu like symptoms. This is impacting on their capacity to pick orders.”

Companies are also boosting logistics resources by taking capacity no longer required in other sectors.

With retailers moving to a war footing, huge changes are being applied to orders from suppliers, focused on keeping core lines going, as well as pack size changes to help families stocking up.

From Tesco axing pints to focus on larger sizes of milk, to Morrisons moving from 17 bakery lines to just seven, for the foreseeable future, suppliers have been forced to slash ranges, in some cases by more than 70%.

“It is our bigger product sizes and formats that are doing well,” adds Brook. ” So we are focusing production on our bulk packs.”

“We’re diverting some of our on trade colleagues to help out in the off trade,” says Darryl Hinksman, cider firms Westons head of business. “That has several different guises, from sales roles to actually putting our guys out in the grocers.

“We’ve had people out all this week stacking shelves, not just with our product and not just in the BWS category.”

From logistics to recruitment to literally keeping shelves stocked, redeployment is proving a key weapon in the industry’s response to the crisis.