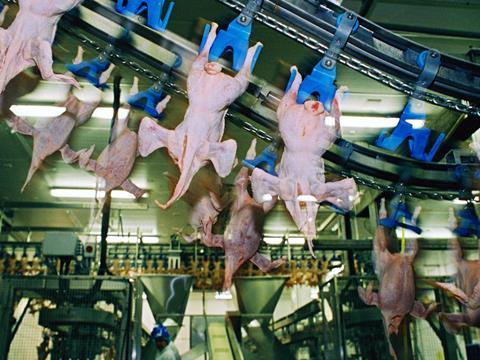 Processors are considering a halt in production due to CO2 shortages

Up to 60% of the UK’s poultry processing plants could be knocked out “within days” due to the ongoing shortage in food-grade carbon dioxide.

That is the stark warning from the British Poultry Council’s CEO Richard Griffiths, who told The Grocer shortages of poultry on supermarket shelves would be inevitable if a solution to the crisis was not found.

Nine of the country’s largest poultry plants were now facing a critical shortage of the gas, which is used in both the slaughtering and packaging process, Griffiths warned.

Read more: How suppliers and supermarkets are reacting to CO2 shortages

“We have never seen anything like this before, and it’s a situation that has become very serious very quickly,” Griffiths said.

“Some of our members have as little as a day’s supply of the gas left, while others have no more than a week or two. The bottom line is that many processors now have a decision to make over whether to reduce throughput or even stop slaughtering altogether.”

Widespread use in slaughterhouses

CO2 is widely used to create the modified packaging atmospheres that extend the shelf life of poultry products.

However, its use in “stun to kill” slaughtering could be the trigger for a widespread halt in production, Griffiths suggested.

“Many of our members have invested significant amounts in biphasic carbon dioxide systems in their slaughterhouses,” he said.

The system sees crates of live poultry lowered into a room containing CO2. As the crates descend, the concentration of the gas increases, ultimately killing the animal.

Not having a secure supply of CO2 meant this slaughtering system would be rendered unusable, “and if they can’t slaughter they will have to stop production”, Griffiths said.

“The alternative methods for slaughter are set up for emergency use rather than a total replacement of the biphasic carbon dioxide system and wouldn’t be able to handle the necessary volumes over any sort of period.”

A halt in production could also have indirect implications for animal welfare, he warned, as birds would have to stay on farm, leading to an increase in stocking densities.

‘Close to the wire’

“Our members are very concerned and have been thrust into a situation not of their making,” Griffiths warned. “The gas companies are working on it, but it’s now getting close to the wire.”

Supplies of CO2 were “very tight”, agreed Avara Foods CEO Andy Dawkins, who added the poultry giant was “monitoring the situation very closely alongside our gas suppliers and industry colleagues”. Meanwhile, a spokesman for Moy Park said: “We are aware of CO2 supply issues across Europe and we will continue to monitor this carefully. We are taking appropriate measures to mitigate any impact.”

The CO2 crisis first emerged yesterday, as The Grocer reported UK supermarkets were on the verge of major shortages in their soft drinks and booze aisles due to a pan-European shortage of food-grade carbon dioxide gas.

Already tightened supplies of the gas had been exacerbated by technical issues at manufacturing plants, reported trade journal GasWorld.

But with food and drink suppliers now scrambling for supply of the gas, the BPC’s Griffiths urged the government to help prioritise CO2 supply for the livestock meat sector.

“We’ve seen the lines about a shortage of World Cup beer, but we have asked Defra and other arms of government to prioritise us and help keep the supply chain moving in order to avoid any knock-on effects in the longer term regarding animal welfare and gaps in food supply.”

A Defra spokeswoman said: “The government is aware that there are reports of a CO2 shortage affecting the food and drink sector, and that industry is working to find a solution. Whilst this is an issue for industry, the government is in contact with the relevant companies and trade associations, including those within the food and drink sector and main CO2 suppliers.”

The BPC’s concerns were mirrored by the British Meat Processors Association, which warned gas shortages were expected to persist for the next four weeks, and had the potential to “affect the supply of meat and meat products to UK consumers as it is widely used in the slaughter and processing industry”.